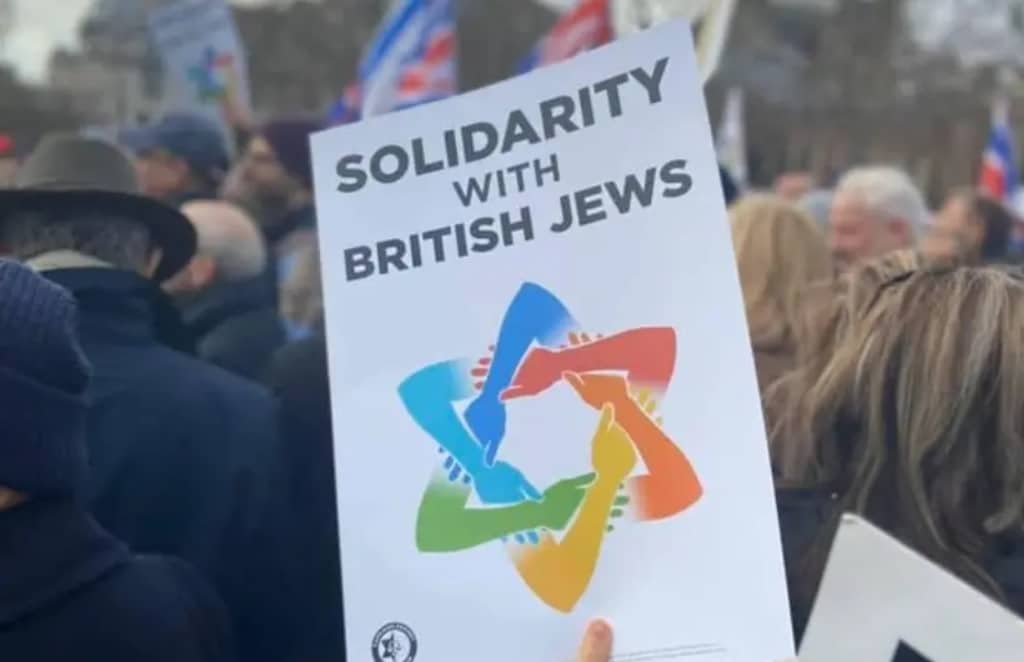 Antisemitism has a long and sordid history of incitement to hatred and dehumanization of Jews. There is no excuse for it, regardless of what is happening elsewhere in the world.

Now that a ceasefire has come into effect between Israel and Hamas, and the temperature, we hope, is lowered around the world, it is important to learn the lessons of the last few weeks.

Over this period, the Jews in Europe and elsewhere have been under assault, online, in the media and on the streets.

From convoys of cars with people waving Palestinian flags, traveling across the UK specifically to target Jewish areas, shouting “F*ck the Jews, rape their daughters,” to the mobs gathered in Brussels and Vienna calling to massacre the Jews, to the 200 people who marched in the city of Gelsenkirchen in western Germany, toward a local synagogue shouting “F*cking Jews.”

Jews have been hunted and attacked in restaurants, rabbis have been beaten in broad daylight, and Jewish institutions have been desecrated in the UK, Ireland, Germany, Austria, Holland, Canada, the US and elsewhere.

Online, the situation was no better. According to the ADL, “Hitler was right” was posted more than 17,000 times in just a one-week span in May.

Statistics in the UK indicate that there was a 568% rise in antisemitic incidents during the conflict, which might well be even higher due to underreporting.

Jews have been forced into the shadows, removing all signs of Judaism in public and staying away from Jewish institutions and areas.

While the coronavirus forced us to stay home due to the risk of infection, the spread of the antisemitism virus has brought on what some are calling the “Jewish lockdown,” with Jews afraid to leave their homes.

That we have reached this situation should be a stain on our societies. We are reaching breaking point for trust between Jewish citizens and the authorities whose role it is to ensure our safety and security.

It is, therefore vital that decision-makers and opinion-shapers take measures to ensure there are no repeats of these incidents and that Jews feel safe on the streets of Europe.

First is the simple acknowledgment that attacks on Jews and Jewish targets are always motivated by antisemitism, no matter the attempt to contextualize them with geopolitical events 3,000 miles away.

It should be obvious, because no other citizens are attacked because of their religious, ethnic or national affiliation with any country of the world. There are currently dozens of armed conflicts around the world with tens of thousands of casualties every year, yet not one of these conflicts is imported to Europe in the way the Israel-Palestinian conflict is.

This is an important point that needs serious evaluation and understanding.

Second is what role politicians and celebrities have in lowering the flames, not just in the context of the conflict itself, but also in the regions where they live.

Classical antisemitic motifs about Israel’s actions – saying Israelis are bloodthirsty and seek the deaths of children, or that they hold some hidden power – are being used as dog whistles to sow hatred toward Jews wherever they are, whatever their views.

POLITICIANS, ACTORS, musicians and sports stars have used social media to relentlessly accuse Israel of all manner of crimes, using provocative language that would not be tolerated if used against any other nation or community.

It is often difficult to reconcile their bile when writing about Israel when compared to their comments about any other issue, if they even notice or react to other issues.

Journalists and the media also have a role to play. A CNN contributor, Adeel Raja, wrote, “The world today needs a Hitler.” Thankfully, she was fired after that tweet. While calling and celebrating genocide of the Jewish people, Raja tried to explain that here comment was merely a pro-Palestinian statement. Yet Raja was still employed as a commentator even though he had repeatedly praised Hitler, tweeting his support for Germany in a football match as far back as 2014 because of “what Hitler did with Jews!”

Especially in recent years when even hint at racism or discrimination often led to dismissal and censure, people can say virtually anything about Jews or Israelis; things that would bring firestorms or criticism if directed toward any other people or community.

This double standard must end.

Marches and demonstrations should be allowed in every democracy, and even unpalatable views should not be censured. However, when a march descends into a riot directed at Jews; when speakers use antisemitic imagery; or marchers display hatred of Jews – as happened at the march in London, where a massive inflatable man with a hooked nose and horns was prominently displayed – it should be stopped immediately and the responsible party or organization should be held responsible and face legal consequences.

Finally, and arguably most importantly, authorities and law enforcement officials must take a zero-tolerance approach to incitement, whether online or off. The number of outright antisemitic posts online have increased exponentially in the last few weeks. Many of these posts are targeted at Jews, often using religion or ideology as a pretext to incite violence and bloodshed.

Police and law enforcement in Europe and elsewhere need to be sufficiently equipped to identify and prosecute those who commit antisemitic incidents and not dismiss them as “political commentary.” As we have learned all too well in recent years, what starts with words can end with blood. Words and actions matter.

Antisemitism has a long and sordid history of incitement to hatred and dehumanization of Jews. There is no excuse for it, regardless of what is happening elsewhere in the world. It is hypocritical and dangerous to claim that targeting Jews helps the Palestinians.

Our decision-makers and opinion-shapers should be asking themselves difficult questions about what they can do to ensure that Jews across Europe will be able to walk the streets safely, and use the Internet without suffering abuse or threats of violence.

This is the challenge for every one of us.

The writer is president of the European Jewish Congress, the umbrella organization of European Jewry, representing some 2.5 million Jews in 42 national communities.