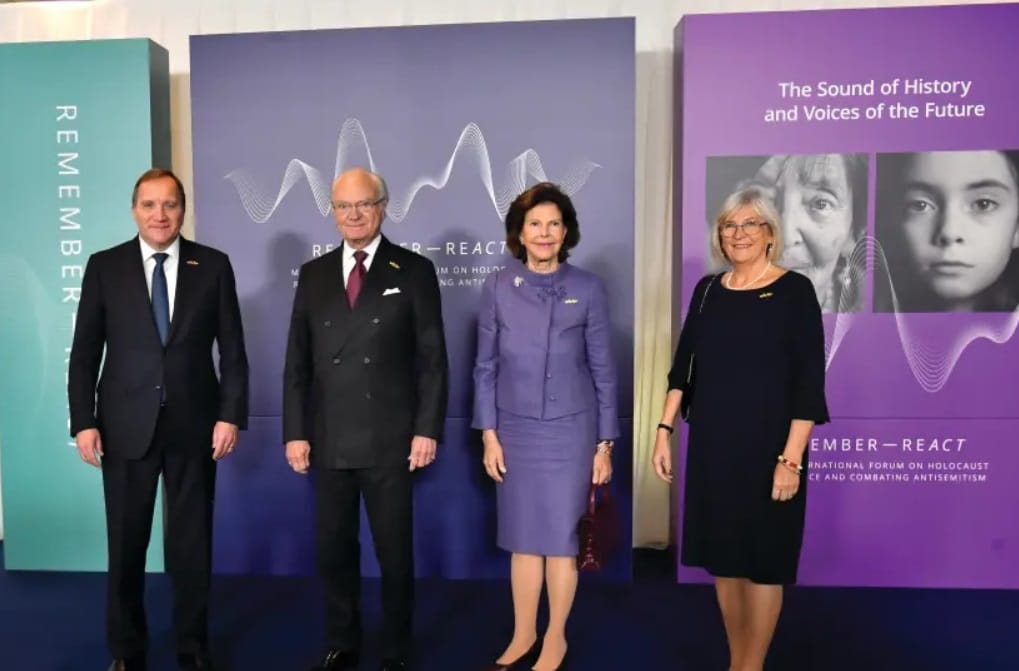 Antisemitism in Sweden has greatly increased in the last few years

In January 2020, around fifty royals, prime ministers, presidents and parliamentary leaders came to Jerusalem for the Fifth World Holocaust Forum, where they stood in unity and solidarity with the Jewish people, paid tribute to the memory of the victims of the Shoah and made a solemn and concrete pledge to actively fight antisemitism.

National leaders and decision-makers around the world instinctively understood that the increasing trends in Jew-hatred needed to be reversed through firm action.

Over the almost two years since that historic occasion, European governments have, overall, acted on this pledge. We witnessed earlier this month the release of the first-ever European Union Strategy on Combating Antisemitism and Fostering Jewish Life, designed to prevent and combat all forms of antisemitism, protect and foster Jewish life, educate, research and commemorate the Holocaust.

This is an unprecedented and vital document that will act as a road map to significantly reduce antisemitism in Europe and beyond. Furthermore, it is a commitment to the Jews of Europe that we belong and are a vital part of the European future. The European Council, a few days ago, reinforced this message, calling on all of its institutions, member states, international organizations, civil society actors and citizens to commit to a future free from antisemitism in the EU and beyond.

It is clear that there is a new understanding and commitment to change. Arguably, nowhere is this more keenly felt than in Sweden. It has widely been felt in the Jewish world that since the turn of the millennium there have been few countries, which have seen such a rapid increase in antisemitism, as Sweden.

This was perhaps best articulated by a woman in her seventies, who testified to the 2019 EU Fundamental Rights Agency report on experiences and perceptions of antisemitism. “I think that Sweden was not antisemitic at all before, that has changed, it’s that which feels so difficult,” she said. “Nowadays, I’m more reluctant to talk about my background. I am concerned about the future.”

In addition, Sweden’s third-largest city, Malmö, had gained a reputation as a microcosm of the worst excesses of antisemitism in Europe. Persistent and violent antisemitic attacks have seen large parts of the Jewish community leave the city. However, recent events have shown that the Swedish government is focusing on and is willing to devote considerable political energy to promoting Holocaust remembrance and combating antisemitism.

The main force behind this renewed commitment is Prime Minister Stefan Löfven, who over the last seven years has listened to the concerns of the Jewish community, shown vision and leadership on the issue and made it clear that the fight against antisemitism is first and foremost a fight for Europe’s values. This commitment culminated two weeks ago at the Malmö International Forum on Holocaust Remembrance and Combating Antisemitism.

As a guest speaker at the Malmö forum, I can personally attest to the depth of the sincerity of Swedish officials in seeking to combat antisemitism. The terminology used was largely unprecedented, acknowledging that anti-Israel rhetoric could be a manifestation of antisemitism and that Jew-hatred can come from both extremes, the Left and the Right, as well as from radical Islamists.

Moreover, Prime Minister Löfven left the delegates in no doubt that the fight against antisemitism is at the forefront of the international agenda. “We are not looking for another declaration, we are looking to translate these principles of these documents into reality,” Löfven said at the forum. “I have therefore encouraged delegations that are represented here in Malmö today to present concrete measures to promote Holocaust remembrance and to combat antisemitism.”

And indeed, concrete measures were put forward. Participating countries, tech companies and civil society organizations submitted a series of pledges as a concrete outcome of the Malmö forum, to be followed up during Sweden’s presidency of the IHRA in 2022.

As someone who has been critical of the state of antisemitism in Sweden in the past, I can only welcome this new atmosphere and practical action emanating from Swedish officials. I believe that there is great symbolism in holding an international event to create new initiatives in Malmö to fight back against antisemitism, a city that has seen Jews driven out en masse. Nonetheless, the time for action is now.

We need new tools for a new generation. Especially youths, who have spent much of the last two years indoors and in front of screens, have become more susceptible to extremism and conspiracy theories. There needs to be a commitment to confronting the issue, allocating significant resources, using new media platforms, developing effective counter-messaging and strengthening education.

We know the problem and we have suggested solutions, now we need to see these plans implemented so the next generation of Jews does not feel the need to leave their homes and communities in order to feel safe and secure. Sweden has become a paradigm about this change in direction and acceptance that concrete action must be sought, and the atmosphere changed if Europe is to be a safe place for Jews. I look forward to once again working with them to end Jew-hatred in all of its manifestations at home and abroad.

The writer is president of the European Jewish Congress, the European Council on Tolerance and Reconciliation and the World Holocaust Forum Foundation

Opinion: The Islamic Republic's aggressive actions over the past five years and its efforts to destabilize the region are clear and it would use...
Read more