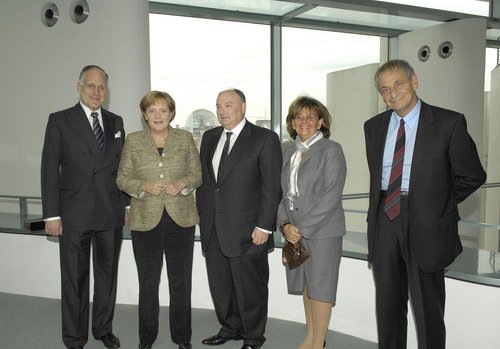 The talks focused on rising anti-Semitism in Europe, on the protection of vulnerable Jewish communities in Germany and central and eastern European countries, and on Iran’s nuclear program which threatens the existence of the State of Israel.

Lauder told Merkel about his growing concerns regarding Iran’s aggressive stance in the Middle East. “We must not let fanatics such as Mahmoud Ahmadinejad destabilize the entire region, “ the WJC president said, adding that “six decades after the Holocaust, Germany – under Mrs. Merkel’s leadership – commands sufficient respect among the family of nations to be a measured and moderate force in world affairs. It has become a symbol for democracy, the rule of law and the protection of minorities in the world.”

In remarks to the press, EJC President Moshe Kantor applauded Chancellor Merkel’s stance on the Iranian issue. “Germany is well aware of the price of silence in the face of danger emanating from fanatical leaders and I applaud the German Chancellor’s outspoken stance in the face of the Iranian threat,” Kantor was quoted as saying after the meeting. “Iran’s president Mahmoud Ahmadinejad is a threat to Europe too. Iran is a center of world terrorism and having nuclear capabilities will allow Iran to equip terrorist organizations throughout the world,” he said.