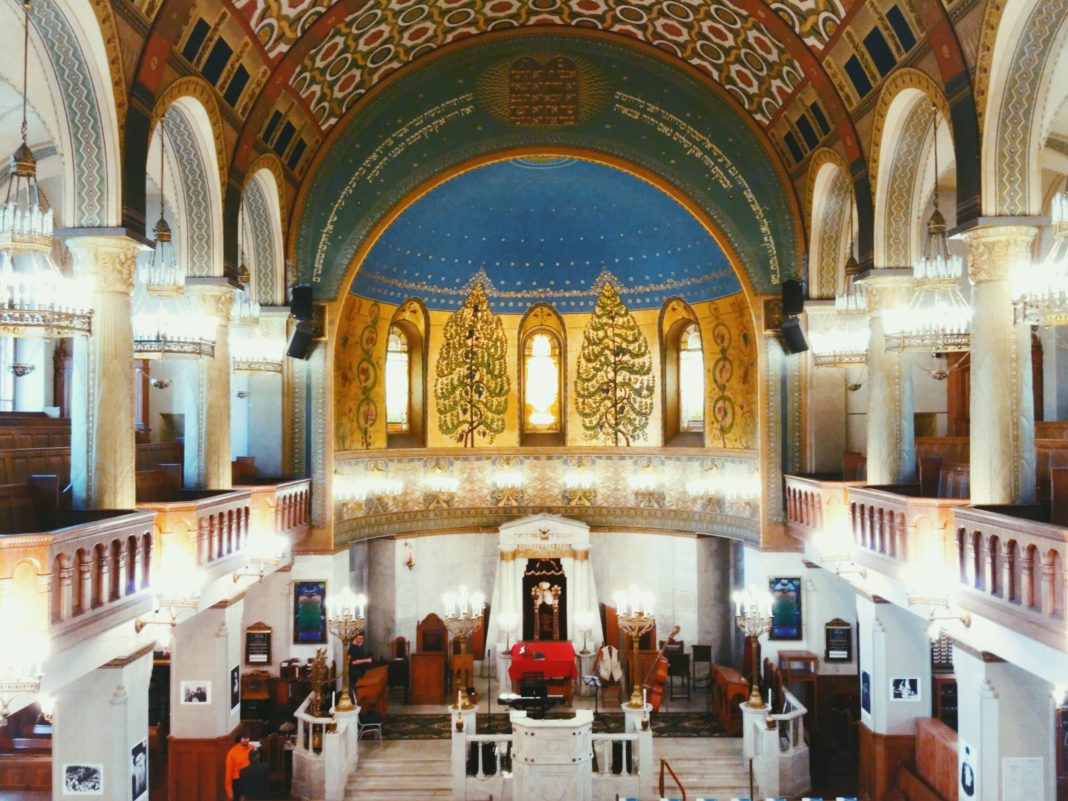 On May 25, Russian Jews gathered in the Great Choral Synagogue to celebrate the 60th anniversary of the founding of the State of Israel. The event was organised by the Russian Jewish Congress in cooperation with the Moscow Jewish Religious Community, the Jewish Agency in Russia, the Israeli Cultural Centre of the Embassy of the State of Israel in Russia and the Moscow branch of Hillel. This was one of the most high-profile events in a series of celebrations held in Moscow throughout May.

The Great Choral Synagogue was chosen as the venue because historically it has played a role in the ties between Russian Jews and the State of Israel. It was here that Soviet Jews first met with Golda Meir, Israel’s first ambassador to the USSR. Refuseniks gathered here in the 1970s and 1980s, and one generation later, the Great Choral Synagogue was the site of acts of solidarity with the people of Israel.

The evening started with a documentary on Meir’s historical visit to the synagogue. Speakers read aloud from her memoirs about the visit. Then Aleksandr Zhurbin, the composer and host of the evening, gave the floor to Anna Azari, Israel’s current ambassador to Russia. She greeted all the people present at the celebration and confessed that she could not count all the occasions that she had been invited to the synagogue of late. “I hope that you empathise with all that happens in the State of Israel,” the ambassador said, finishing her short address with words of gratitude to the ceremony’s organisers.

After Azari’s speech, guests were surprised with a specially recorded video address by President of the State of Israel Shimon Peres. On behalf of Israel and on his own behalf, he greeted members of the Russian Jewish community who gathered to celebrate the country’s anniversary at the Great Choral Synagogue in the historical heart of Jewish Moscow. “The history of relations between the Jewish State and Russian, then Soviet, Jewish community has its roots here. Today these relations between strong Israel and the strong Diaspora are of mutual significance,” Peres said in his address.

“We remember that Russian Jews were present at the birth of the State of Israel. We remember the great contribution Russian Jews have made and continue making to the development of our country. We appreciate this contribution,” the President emphasised, ending with the words “I would like you to know that your support is of great importance to the State of Israel. I want Israel to dwell in your hearts and thoughts just like you are in our hearts and thoughts. I congratulate you on our common holiday and wish the Russian Jewish community peace, happiness and prosperity.”

Following Peres’ video address, Viatcheslav Kantor, president of the leading Jewish organisations the Russian Jewish Congress and the European Jewish Congress, took the floor. “Today, as we celebrate the 60th anniversary of the State of Israel, it is important to remember that the creation of Israel was the compensation paid by humanity for tolerating the Holocaust,” said Kantor. He reminded the audience that Russia played a key role in the creation of Israel when, during the dramatic November 1947 United Nations vote, five countries of the Soviet block ensured the necessary two thirds majority. According to the RJC president, Russia has always been close to Israel. It is particularly close to Israel today, when every fourth Israeli speaks Russian.

The president of the Russian and European Jewish Congresses also underlined the inseparability of Israel and the Jewish Diaspora. Kantor said that “Israel has almost no raw materials except the bitter salt of the Dead Sea. Its main treasure lies in people of the Diaspora on whom Israel can always rely. For us, members of the Diaspora, Israel is our greatest treasure. It is our guarantee that the Holocaust will never happen again. That is why we will make every effort to ensure the development of Israel. The creation of the State of Israel was the best project of the Russian and European Jewry. We are proud of this project and will always support it.”
The official part of the celebration drew to a close with an address by Russia’s Chief Rabbi Adolf Shayevich. He began his speech by describing his first visit to the Great Choral Synagogue in April 1972. “In those days, people who had never imagined that they would have to sacrifice their careers for the desire to emigrate worked here as janitors and plumbers. This was a club where people exchanged news and found out who had been given permission to emigrate and who had been refused,” the Rabbi said. Fortunately, the situation in the country has changed. According to Shayevich, Russia and Israel are close not only spiritually, but practically, since so many Russians have relatives living in Israel. “Some people say Israel is illegitimate because it was allegedly created against the will of G-d. But I do not agree with that. Everything that happens is done according to His will. That is why Israel is the project of the Almighty. He punished us two thousand years ago, but sixty years ago He gave us another chance. We must be worthy of this chance.”

The evening continued with a concert opened by the A. Aleksandrov Academic Ensemble of Song and Dance of the Russian Army. After singing the traditional “Hava Nagila,” “Shalom Aleichem” and “Yerushalayim Shel Zahav,” the soloists broke out with a performance of “Kalinka” that was received with equal enthusiasm. Zhurbin paused to tell the old joke about how any Soviet Jew who emigrated to Israel without a violin was probably a pianist, and then invited the Moskovia Chamber Orchestra directed by the People’s Artist of the USSR Eduard Grach to take the stage. After giving brilliant performances of several classical pieces, the chamber orchestra gave the floor to Yakov Yavno, a U.S. performer of Jewish songs. Yavno sang several compositions from his new programme “Songs of Our Soul,” which he specially prepared for Israel’s 60th anniversary. After that, Zhurbin was moved to sing, too. The celebration ended with “Hatikvah,” the anthem of the State of Israel.