New European Council On Tolerance: We Demand Action From The Citizens Of Europe 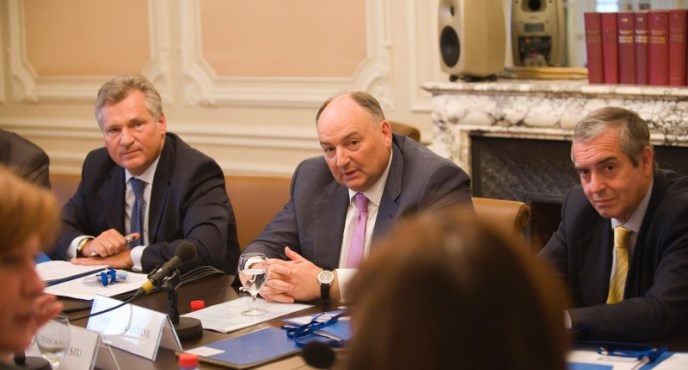 (October 7, 2008) The European Council on Tolerance and Reconciliation (ECTR) held its inaugural meeting in Paris on Tuesday, 7 October 2008 under the chair of former Polish President, Aleksander Kwaśniewski.

The ECTR, a non-governmental organisation, is comprised of former heads of European states, Nobel Peace Prize laureates and other world renowned individuals for their achievements in promoting tolerance.

The council laid out a vision whereby the average citizen of Europe would not be a bystander to intolerance, but rather work against acts of racism, xenophobia and anti-Semitism.

The first meeting set out the initiatives to advance concrete political, cultural and educational initiatives to instill a more tolerant Europe. Kwasniewski said: “With the experience of many distinguished politicians from various European countries, we believe that we can make a difference. We can’t change the past; however, our job is now to change the future.”

ECTR Co-Chair Moshe Kantor, President of the European Jewish Congress, struck a more bullish tone. “We will carry this fight to the streets of Europe. We want Europe’s politicians to work together to fight intolerance. We demand action, not just words,” Kantor said.

Among the many initiatives promoted by the council are to recommend a European Framework Convention on Tolerance. This will serve as a pan-European initiative to introduce anti-racist laws and practices to every nation accordingly.

“It is better if we do this together, as Europeans, rather than just as citizens of our own countries, or as Christians, Jews and Muslims, each one on their own,” council members related at the inaugural meeting stressing the need for this unique organisation.

The members of the council had one eye on the past but were optimistic about the future. They declared that the hatred between different nations that dominated European history for so long has practically been overcome. However, it was felt that within European societies, a lot of hatred and intolerance remains.

“Whoever says that Europe has learnt all the lessons of its darkest hours – seventy years ago – is ignoring what regularly happens on our streets today,” Kantor related. The European Jewish Congress president was referring to the fact that almost seventy years ago to the day of the meeting the Nazis promulgated Kristallnacht, a 1938 Nazi-led pogrom in which Jews were physically attacked and killed and Jewish institutions were destroyed.

“This will be a long-term project, one that we are dedicated to press with European and national decision-makers across the continent,” Kwaśniewski promised. “In November, a special event promoting tolerance will be held in the European Parliament in Brussels. There, we will present concrete proposals.”

The new body also determined to honour King Juan Carlos I of Spain with a ‘Medal of Tolerance’ for his lifetime achievement in fostering mutual respect.