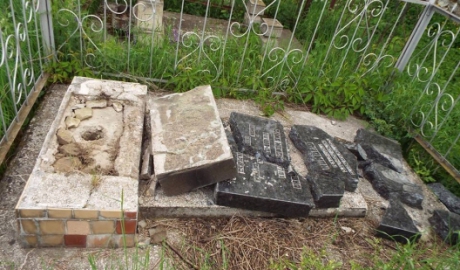 BUCHAREST. Several dozens of members of the Jewish community in Romania denounced on Wednesday the authorities’ indifference” after over 130 graves and over 100 monuments were destroyed in the Jewish Cemetery in Bucharest last week.

Unknown vandals knocked over and in some cases destroyed the headstones in the cemetery where at least 35,000 Jews are buried, including victims of the Holocaust.

The desecration took place during the Jewish holiday of Simchat Torah.

Police opened an investigation but assured that it was not an anti-Semitic action.

“All devastated tombs are mine,” renowned Romanian actress Maia Morgenstern declared during a gathering at the cemetery, complaining about what she called the bureaucratic and administrative indifference.

She added that local authorities intend to transform the unacceptable in acceptable and underlined the lack interest displayed by authorities.

Romanian Elie Wiesel Institute executive director Alexandru Florian declared that in Romania there are not only indirectly racist expressions or symbols but also actions based on such thinking.

“One week ago, anti-Semitic violence has reached its peak,” he added.

At the meeting, he read letters from both the President and the Prime Minister’s Chancellery condemning such acts.

Two weeks ago Romanian Prime Minister Calin Popescu Tariceanu announced the construction of a monument dedicated to the victims of the Holocaust in the centre of Bucharest.

The European Jewish Congress (EJC) has called on the Romanian government to take measures to find those responsible.”We urge the government to see that justice is carried out and to promote a policy of tolerance and education in Romania in order to prevent such actions. This is the most relevant response,” said Moshe Kantor, the EJC’s president.

“Condemnation of these attacks is important, but it is equally important that justice is achieved. The EJC is committed to developing tools and educational programs to encourage tolerance and understanding in Europe.”

Around 400,000 Romanian Jews were killed by the Nazi regime during WWII.

Romania has struggled to come to terms with its role in the Nazi extermination of Jews. It denied any participation in the Holocaust until an international commission chaired by Nobel Peace Prize laureate Elie Wiesel said in 2004 that Romanian authorities had killed up to 380,000 Jews in territories under their control.

Under pro-Nazi Marshal Ian Antonescu, Romania became a German ally in 1940 but switched sides just before the war ended.