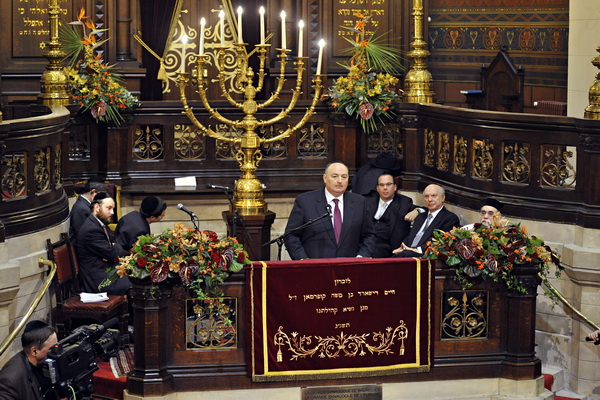 BRUSSELS, 11 NOVEMBER 2008 – Two days of events were held in Brussels to commemorate the 70th anniversary of Kristallnacht and to launch a new program of tolerance across Europe. The events sponsored by the European Jewish Congress, the European Council for Tolerance and Reconciliation, Yad Vashem and the World Holocaust Forum were attended by, amongst others, the president of the European Parliament, the president of the Parliamentary Assembly of the Council of Europe, the Prime Minister of Belgium and a number of politicians, diplomats and dignitaries from across Europe.

The events were part of a week promoting tolerance that extends from the anniversary of the 1938 pogroms in Nazi Germany (‘Kristallnacht’) to the official UN International Day of Tolerance. The purpose of the events was to remember the bleak night seventy years ago when Jewish businesses and synagogues were sacked, Jews were murdered and maimed and tens of thousands were sent to concentration camps. ‘Kristallnacht’ was seen as a test of tolerance by the Nazi leadership to the outside world. According to the President of the European Jewish Congress, Moshe Kantor, “Hitler checked the tolerance of Europe twice before starting World War II. First he experimented with the Jews and then he experimented with Europe.” On both occasions Europe was found to be “criminally tolerant”, according to Kantor.

Speaking at the European Parliament, Kantor said that although it was vital that today’s Europe learn to be more tolerant of the other, “tolerance can be both a medicine and a poison.” Kantor suggested that it is the bystanders that are usually most affected and pay the greatest price. Over 50 million non-Jews and non-Germans died as a result of Nazi aggression whose excesses were initially tolerated by the watching world.

Speaking at the same event, Hans-Gert Pöttering, president of the European Parliament, told the audience of dignitaries “Kristallnacht was the beginning of Auschwitz. Some, many, too many – in the name of appeasement – failed to see the omen.” Pöttering said that lessons from the Holocaust have been learnt by Europeans and this is a major success of the European Union. “We have let ourselves be guided by one particular value which gives the European Union its true soul: this value is tolerance. And it took us centuries to learn this.”

The event in the European Parliament was preceded by a commemoration of ‘Kristallnacht’ in the Great Synagogue of Europe, in Brussels. Hundreds assembled to hear Holocaust survivors talk of the magnitude of the night seventy years ago hundreds of synagogues were set ablaze and Jewish property was looted. Former Ashkenazi Chief Rabbi Yisrael Meir Lau, the new chairman of Yad Vashem, spoke of a need to remember the Holocaust and described the events he witnessed as a child in Nazi Europe.

Kantor and the chairman of the new European Council for Tolerance and Reconciliation, former Polish President Aleksander Kwasniewski, also laid out their plans for a more tolerant Europe. Both men presented a ‘White Paper on Tolerance’, listing in detail practical measures that the council would seek to promote. Including senior and respected politicians, the council will seek to lobby European governments to adopt stronger laws and policies against intolerance, racism, xenophobia and anti-Semitism. Kwasniewski said that the Council will create a list to favourably judge those nations that institute practical measures to fight intolerance. The former Polish head of state also called for the citizens of Europe to do their part in the battle against extremism. “The world watched ‘Kristallnacht’ without reacting. We must react and organise public opinion, without it authoritarian regimes will move forward with their plans,” he pointed out.

Kantor warned that just as the Nazis tested the water by attacking Jews before starting World War II, so too did a belligerent Iranian leadership who openly calls for the destruction of Israel. The president of the European Jewish Congress stressed that parts of Europe were once again placing economic interests above their morals. Kantor criticised that 5,000 European companies were still doing business with Iran despite sanctions, and many even assisted the Iranian nuclear weapons program.

At a diplomatic dinner hosted by Kantor and Kwasniewski, Belgian Prime Minister Yves Leterme was awarded the “Navigator of Jerusalem” Prize for his commitment against Holocaust denial, anti-Semitism and the anti-Israeli agitation by Iranian President Mahmoud Ahmadinedjad. Leterme spoke of his affection for Israel in front of an audience which included many Arab and Muslim ambassadors and officials, many of whom do not have diplomatic relations with Israel. Referring to his award, Leterme said that it was apt that he receive such a gift as much of Europe has taken its moral compass from Jerusalem, the birthplace of the three great monotheistic religions.

Many of the numerous speakers throughout the two days of events spoke about two recent developments that bode well and less well for promoting tolerance. The election victory of Barack Obama in the United States was seen as a very good example of tolerance and inclusion. However, many speakers also warned that the economic crisis could signal a turn for the worse for peace and reconciliation.

The French Holocaust survivor and author Samuel Pisar spoke at the European Parliament about the significance of a worsening economic situation and its history of unleashing extremist forces. “This is a sombre moment in history. Economic misery always looks for scapegoats and at the fore of the list are always Jews,” Pisar said, noting the rise of Nazism shortly after the ‘Great Depression’ in 1929.