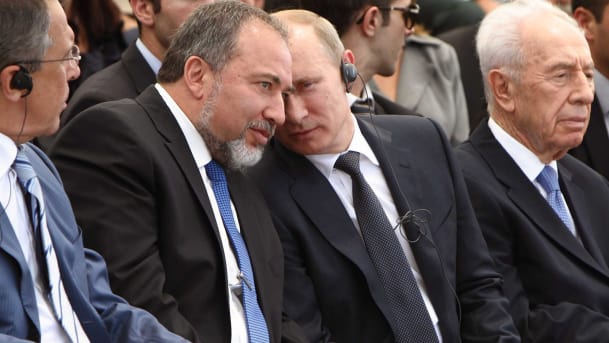 In early June, Israeli Foreign Minister Avigdor Lieberman is expected to make his first official visit to Moscow to meet with Russian leaders.

During his visit, Lieberman plans to discuss the issue of Russian-Israeli relations, the Middle East peace process and geopolitical challenges within the region. According to experts, the discussion will focus on Jerusalem’s indivisibility and the Iranian nuclear problem.

In his comments on the Lieberman’s upcoming visit, President of the European Jewish Congress Viatcheslav Kantor praised efforts made by Lieberman and Prime Minister Benjamin Netanyahu in their struggle against contemporary challenges and thanked the Russian government for its support of Israel.

“The big players such as Russia, the U.S. and the united Europe should not abandon Israel in the face of contemporary global problems,” the EJC President said. Kantor, who is also president of the Luxembourg Forum on Preventing Nuclear Catastrophe, said that certain countries’ adherence to the principle of neutrality or nonparticipation in the serious measures aimed at containing rogue nations’ military nuclear ambitions could cost the whole world dearly in terms of human life.

“Despite the officially declared support of sanctions, 6,000 European companies are involved in open collaboration with the Iranian regime,” said Kantor. According to the EJC president, in the 20th century the world paid a high price for its inactivity and non-interference caused by a desire to cooperate with the growing economy of Nazi Germany. At that time, “Fifty million Europeans died, while a third of the whole Jewish population burned in the fire of the Holocaust” while opposing the fascist regime, Kantor said. “Any tolerance should have its limits and we should make a vivid distinction between economic cooperation and the rise of new militarist regimes that are inseparable from the global terror network,” he added. In order to avoid the political mistakes of the past, “All countries both big and small should unite now for the struggle against the nuclear threat caused by such rogue nations as Iran, North Korea and Pakistan,” Kantor emphasized.