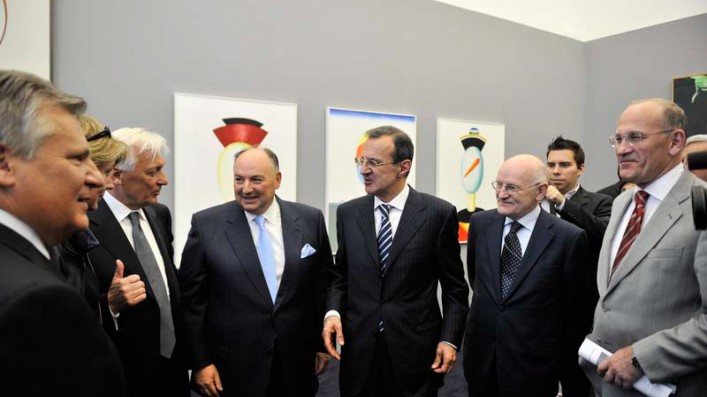 An exhibit celebrating the Jewish contribution to art and European culture opened at U.N. headquarters in Geneva.

The exhibit – the first-ever public presentation of the collection of the Museum of Avant-Garde Mastery, one of the world’s most important collections of 20th century Russian avant-garde art — features original works by internationally recognized Jewish art masters, especially Russian Jews, including Chagall and Rothko.

Titled “My Homeland is Within My Soul, Art Without Borders: The Jewish Contribution to Art and European Culture,” the exhibit opened Thursday to an audience of European government officials, members of parliament and the diplomatic corps of the United Nations.

“While the artists’ names are well known, the aim of the collection is unique,” said Dr. Moshe Kantor, chairman and founder of the museum and president of the European Jewish Congress, during the exhibition’s opening. “There was a deliberate effort to select artists that promote the role of culture in forming a tolerant society, with special attention paid to highlighting cultural interaction and the important contributions and influence of outstanding Jewish artists to world culture.

“This exhibition beautifully demonstrates the extraordinary contribution of Jews to European art and culture,” he said. “Chagall himself famously noted that ‘If I were not a Jew … I wouldn’t have been an artist,’ yet few truly understood that his brush was guided by his strong Jewish identity.”

Cantor went to say that “We hope that the works on display by internationally recognized masters will inspire tolerance and understanding while also encouraging our youth to take pride in their Jewish roots, which many of these artists demonstrated through the medium of art.”

The exhibition, which involved the cooperation of the UN director general in Geneva, the Russian Embassy and Kantor, will travel to other countries.