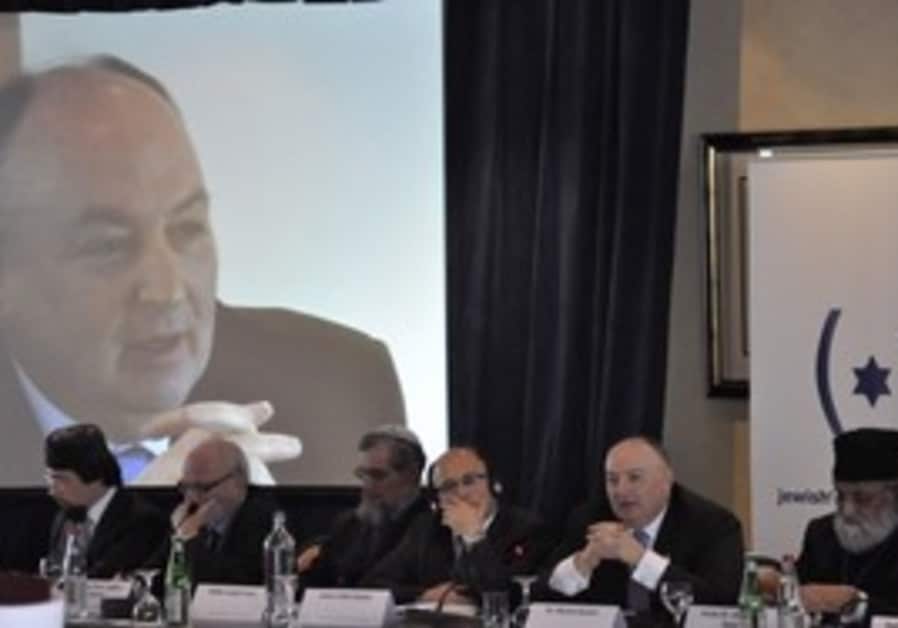 A delegation of Muslim and Jewish religious leaders from Europe met with European Council President Herman Van Rompuy in Brussels on Monday to share their initiatives for bettering the relations between the communities, as well as legislation to ensure the rights of the religious groups in Europe.

The meeting with the president was part of a daylong gathering of some 50 city and state rabbis and imams from Western Europe, brought together for panel discussions on the condition, but primarily the future, of relations between Muslims and Jews in Europe, in a joint effort by the New York-based Foundation for Ethnic Understanding (FFEU), the World Jewish Congress (WJC) and the European Jewish Congress (EJC).

EJC head Moshe Kantor stressed in his opening remarks how education was a key element in bringing about reconciliation between the groups, and how legislation was key in ensuring tolerance toward minority groups. Kantor, who brought The Jerusalem Post to the event, reiterated his call for EU countries’ need to immediately adopt the Framework Decision on Combating Racism and Xenophobia.

Since the condition of the relations between the faith groups differ from country to country, imams and rabbis from the UK, France, Germany and Italy presented, in turn, the key issues and action they were taking to face the challenges of their specific communities.

Such challenges are influenced by endless factors, such as the backgrounds of their flocks, their socioeconomic standings and the degree of integration into mainstream society.

Later, the participants attended a kosher-halal working lunch with senior officials at the European Commission, and met with Van Rompuy, who expressed his support for the group’s efforts and called for a “revolution of moderation” in religious communities in Europe.

In a private meeting with Van Rompuy, Kantor expressed his concern over the condition of some Jewish communities, such as Malmö, Sweden, where Jews are feeling forced to leave the city.

“If Jews are being driven out of parts of Europe once again, this does not bode well for the future of the continent,” Kantor, who co-chairs the European Council for Tolerance and Reconciliation, told the president.

He also suggested that the EU impose on its members and officials a code of behavior that would sanction those who made anti-Semitic and racist remarks.

In addition, Kantor called on the EU to end the freeze on its upgrade in relations with Israel.

“If we hope to live in a free and peaceful world, we need to bolster the only democracy in the Middle East, especially at a time when its mere presence is challenged,” he said, referring to the threats from Iran.

Before the day wrapped up with Hanukka candle-lighting and a dinner with the Brussels Diplomatic Corps, the draft of a common statement calling for closer cooperation between the two communities in Europe was presented. The statement expressed a wish to put an end to “the mutual fear and resentment precipitated in large part by the conflict in the Middle East, which all too often in recent years has caused violence between members of our two communities.”

This campaign of interfaith dialogue and understanding, the statement continued, “will strengthen the forces of moderation in both communities and serve as a check to voices preaching extremism and violence, that are a danger to the moderate majorities in both communities, and to our efforts to build a united, free and pluralistic future for Europe,” while taking steps “to ensure that Jews and Muslims are able to practice our respective faiths fully and unimpeded by intrusive, discriminatory and unfair governmental regulations.”

It concluded, “We commit ourselves to successfully developing good Muslim-Jewish relations in our communities and across Europe, thereby showing our two peoples and the larger societies in which we live that Muslims and Jews can live and work together fruitfully for the betterment of all.”

“Today, we have hopefully kick-started a movement that will spread across Europe,” he said. “The recipe really is quite simple: Our two communities must focus more on what unites us than what separates us. We also must restrain the radicals within our own ranks and make sure they don’t gain the upper hand.”

Schneier also noted the great importance of the different religious groups expressing empathy with one another, noting as a moving example the prayers that Imam Dr. Abduljalil Sajid, chairman of the Muslim Council for Religious and Racial Harmony, offered in his address for the victims of the recent forest fire in the Carmel.

As one of the participants said, “there is definitely room for hope. Five years ago, a meeting such as today’s would never have taken place.”