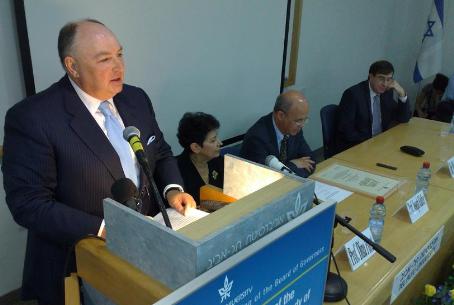 The European Jewish Congress (EJC) has published advertisement in the International Herald Tribune calling on European leaders to reject a Palestinian Authority unilateral declaration of independence at the United Nations.

”Only a negotiated settlement can bring lasting peace to the Middle East” and “unilateral action threatens regional stability and the hope of a peaceful future,” the advertisement states.

EJC President Dr. Moshe Kantor and various European leaders from Spain, Germany, Austria, France, Norway, Ireland and Britain, among others, have agreed that unilateral steps would harm the peace process.

“It is important that the Oslo Accords and other agreements serve as a reminder as the European Union member states decide how to vote in the United Nations on the unilateral declaration of statehood by the Palestinians,” Kantor said of the advertisement. “The EU was a witness to these agreements and their signature should be honored for the sake of peace and security in the Middle East.”

The Oslo Accords, witnessed and signed by the European Union, Israel and Palestine Liberation Organization (PLO) leader Yasser Arafat, stated in Article, “Neither side shall initiate or take any step that will change the status of the West Bank and the Gaza Strip pending the outcome of the permanent status negotiation.”

The advertisement continues: “This is not the time to act outside of the boundaries of international agreements, or to unleash expectations that may lead to disastrous consequences for Palestinians and Israelis, and for the region as a whole.

“This week, the eyes of the world will look to Europe. The EJC urges the European community to leverage its unique standing in the UN and its historic role in the Middle East to keep the peace process alive and to sustain hope among those who yearn for a peaceful future.”

Kantor said, “This is not about statehood for the Palestinians, because the entire international community, including the State of Israel, supports and endorses the ‘two states for two peoples’ solution. This is about respecting signed agreements and seeking a negotiated solution as the only way to end the conflict.”