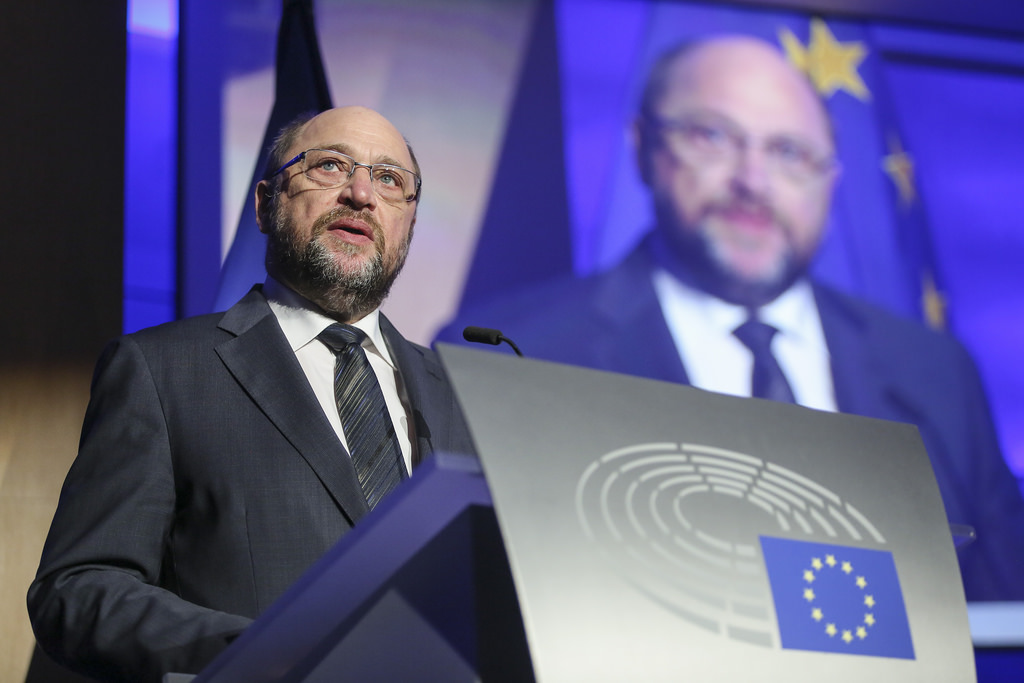 The newly elected President of the European Parliament, German Martin Schulz, paid tribute to the memory of the six millions Jews who were killed in the Holocaust, during a special ceremony at the seat of the EU institution in Brussels.

“As a German representative who was born after World War II , I feel that I have a very specific responsibility. Because what was decided at the so-called Wannsee conference, the extermination of the Jewish people, was done in the name of the German people,” he said at the event organized Tuesday by the European Jewish Congress to mark the International Holocaust remembrance Day organized by the European Jewish Congress.

“I am a representative of the German people and the German people of today is not guilty but responsible to keep the memory and to never forget what happened. For me, this means whoever is representing today the German nation has one first duty: to take into account our responsibility for the Jews in the world.”

“My first duty as a German representative and as President of this parliament is to say: never more,” he added.

“Whatever happens in the world today regarding anti-Semitism or actions against the existence of the Jewish community or the state of Israel, we are the first who have to defend our Jewish friends,” Schultz said.

“The Holocaust must always be fresh in our minds and souls, in the conscience of humanity, and should serve as an incontrovertible warning for all time.”

Schulz has decided that from next yar the Holocaust Remembrance Day which commemorates the liberation of the Auschwitz-Birkenau concentration camp on 27 January 1945 ill become an official annual event of the European Parliament.

During the ceremony, European Jewish Congress President Moshe Kantor called on Europe “to recognize evil and prevent its reemergence.”

“If we don’t remember it, and don’t study it, and don’t learn about it, we cannot learn from it; we can never be confident we can recognize it and stop its emergence in time,” Kantor told the audience which also included Israel’s Minister for Public Diplomacy and Diaspora, Yuli Edelstein, as well as several EU Commissoners and ambassadors.

The ceremony, which began with ‘El Maleh Rahamim’, the Jewish memorial prayer, was marked by moving testimonies from Holocaust survivor Chana Bar-Yesha, who lives in Israel, Andrée Geulen-Herscovici, a Belgian Righteous Among the Nations who saved around 4,000 Jewish children during the Holocaust, and Justice Gabriel Bach who was the senior prosecutor at the Adolf Eichmann trial in Jerusalem in 1961.

He also said that “we are witnessing a rise in anti-Semitism” in Europe. He mentioned in particular Sweden which, he said, “has become the center of anti-Semitism.” “In the city of Malmö, for example, Jews have disappeared because of this situation and the Swedish government doesn’t react.”