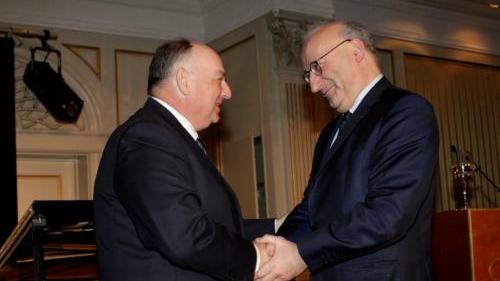 The head of the umbrella body for European Jews has been awarded one of France’s most prestigious honours.

Dr Moshe Kantor, president of the European Jewish Congress, was given the Chevalier Dans L’Ordre National de la Legion d’Honneur – the highest level of the order – at a ceremony on Tuesday.

President Sarkozy gave him the award, which dates back to 1802 and was established under Napoleon Bonaparte, in recognition of his work challenging racism and antisemitism in Europe.

Dr Kantor joins other recipients of the honour including former US president Dwight Eisenhower and Queen Elizabeth II.

He said he was humbled to receive the award.

“For many years I have tried to press European leaders to establish new and tougher laws against racism and antisemitism.

“Today, unfortunately, I remain haunted by the permanent threat represented by the evil of antisemitism,” he added, noting that this Friday is internationally marked as Holocaust Memorial Day. “Contrary to what many people thought in 1945, antisemitism did not disappear after Auschwitz. It is still a growing concern, and therefore I see it as a duty and a personal responsibility to continue fighting this phenomenon.”