France: Toulouse In Lockdown As Police Search For Killer Of Jews 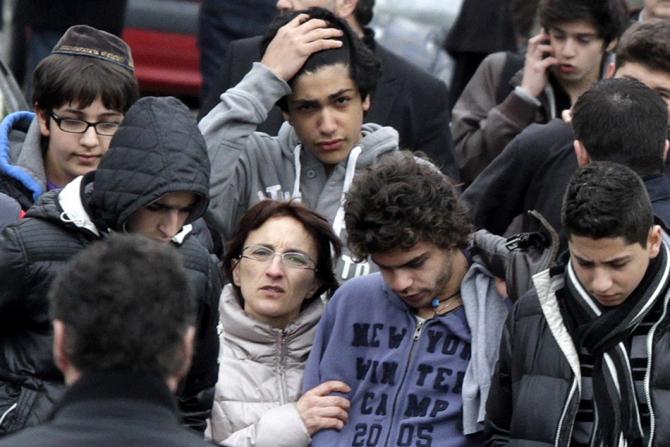 The president of France Nicolas Sarkozy has condemned the mass murder of four people – including three children – at a Jewish school in Toulouse in southern France.

Putting his re-election campaign temporarily on hold, Sarkozy said the shooting was a “national tragedy” and promised to find the killer or killers responsible. He also called for a minute of silence in all French schools to mourn for the dead.

“We should not back down in the face of terror,” Sarkozy said in an appearance outside the school.

“Barbarism, savagery, hate must not win. The [French] Republic is much stronger than that. You cannot murder children like this on the territory of the Republic without being held to account. Today is a day of national tragedy. I want to say to all the leaders of the Jewish community, how close we feel to them. All of France is by their side.”

A gunman passing by on a scooter fired indiscriminately at the Ozar Hatorah Jewish school on Monday.

Another person was seriously wounded in the shooting.

Michel Valet, the chief prosecutor at Toulouse, told local media: “[The gunman] shot at everything he could see, children and adults, and some children were chased into the school.”

One father with a child at the school told France’s RTL Radio: “I saw two people dead in front of the school, an adult and a child… Inside, it was a vision of horror, the bodies of two small children. I did not find my son, apparently he fled when he saw what happened. How can they attack something as sacred as a school, attack children only sixty centimeters tall?”

Sarkozy’s principal challenger for the presidency, socialist candidate Francoise Hollande has also suspended his campaign to grieve for the victims in Toulouse.

Meanwhile, French police officials and anti-terrorism specialists are concerned that the shooting at the Jewish school may be linked to the murder last week of three French paratroopers in two separate incidents in the same region of France. In all cases, gunmen drove by in a scooter and motorbike and shot their targets.

“We are struck by the similarities between the modus operandi of today’s drama and those last week even if we have to wait to have more elements from the police to confirm this hypothesis,” Sarkozy said in Toulouse.

Toulouse is reportedly on “lockdown” as dozens of police fan out over the area to search for the killer. The national government has also ordered upgrades security in Jewish schools and religious buildings across France.

Israel has also condemned the massacre.

“In France today there was a despicable murder of Jews, including small children,” Israel Prime Minister Netanyahu told a meeting of his Likud party officials.

In a statement, Israel’s foreign ministry said: ” We are horrified by this attack and we trust the French authorities to shed full light on this tragedy and bring the perpetrators of these murders to justice.”

Condemnation came from various others quarters as well.

A spokesman for The Vatican, Father Federico Lombardi, told reporters: “The attack in Toulouse against a teacher and three Jewish children is a horrific and heinous act.”

Germany’s foreign minister Guido Westerwelle said in a statement: “I hope the perpetrators are found quickly and are called to account. Anti-Semitism and violence against Jewish institutions or people of Jewish faith have no place in Europe and must be rigorously punished.”

Some Jewish groups in France have blamed the murders on the climate of growing intolerance in the country.

Jonathan Hayoun, the head of the Jewish students union of France (UEJF), said in a statement that “anti-Semitic and racist speech has created a climate of insecurity for Jews in France”.

Moshe Kantor, president of the European Jewish Congress, lamented: “While many of the details are still emerging, it appears that this was a premeditated attack with the intention to murder Jewish children. We hope the authorities will spare no resources in apprehending the perpetrator. Whoever did this is looking to target the Jewish community at its weakest point, its youth, in the hopes of spreading fear throughout the community.”

Kantor added: “They will not succeed, the Jews of Europe in general and the Jews of France in particular have a long history of standing firm against hatred and violence. I know as a community French Jewry will send a message of strength and resilience in the face of those who wish to terrorize them. The greatest defense against race-based murder is not by creating higher walls and more effective security systems, but by teaching and imparting tolerance in the classrooms.”

France is home to some 700,000 Jews, making it the largest Jewish community in Europe. France also has the continent’s biggest Muslim population, estimated at about 5-million