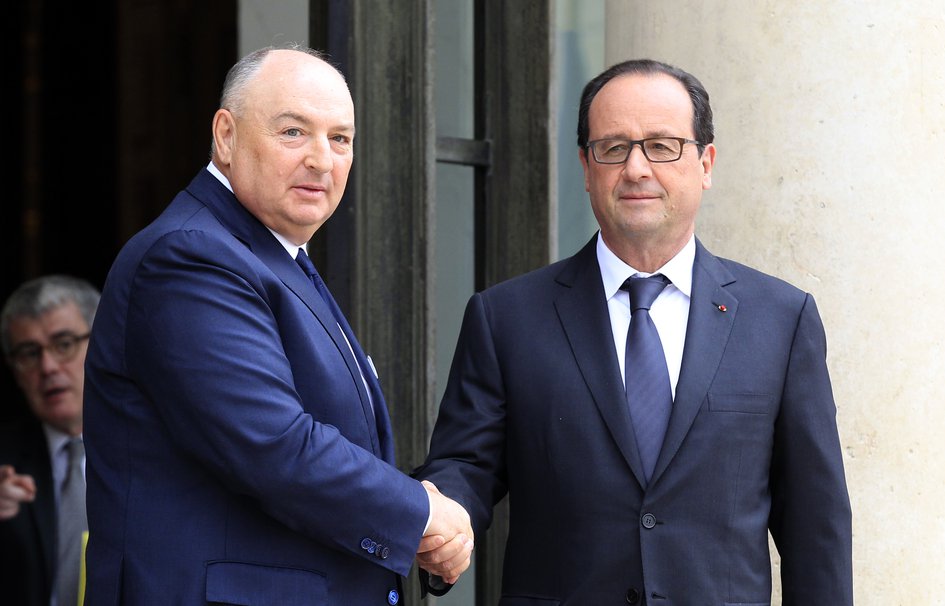 Francois Hollande appreciated the visit of this high ranking European Jewish delegation, led by its President. Viatcheslav Kantor thanked Mr. Hollande on behalf of the EJC and made a presentation of the organization and its priorities.

He recalled that Jews have been citizens of Europe and have been living in Europe for centuries. They have always obeyed the rule of law of the countries that they live in and supported official authorities, he mentioned. “That is how Jews have survived for centuries. However, this means that democratic values must prevail to avoid extremism and anti-Semitism”, Kantor added.

EJC President expressed worries on behalf of the Jewish community of Europe, regarding growing hatred and anti-Semitism. He mentioned the horrible tragedy in Toulouse and gave his interpretation of the facts and of the reasons of such a horrible phenomenon, in France in particular. Viatcheslav Kantor advocated the concept of secure tolerance and presented to Francois Hollande his new book “Manifesto on Secure Tolerance”. He said that too much tolerance is as dangerous, as well as a complete absence of tolerance. Kantor noted that tolerance towards acts of hatred produces such phenomenon as Toulouse.

Pierre Moscovici stated that if his candidate would win the elections, security would be one of his priorities. He said that the Jewish community in France was a very influential and strong community, but it was needed to admit that the Muslim community was also very strong, and they should find a way to live together.

Viatcheslav Kantor invited Francois Hollande to a conference of the European Council on Tolerance and Reconciliation (ECTR) that will take place on November 13, 2012 in Kazan and will be devoted to the concept of secure tolerance. Mr. Hollande accepted the invitation to participate in this high-level event.

On behalf of the Socialist Party of France Mr. Holland mentioned that the party has friendly relations with Israel and is profoundly attached to its security. Touching the Iranian issue Hollande noted that Iran represents one of the major threats to humanity today and not only to Israel. “Iran must not have access to the nuclear arms but we believe in sanctions and not in military solutions. Anyhow, Israel must feel international support and in no way has to be left alone to face this threat”, he said.

Francois Hollande found the meeting extremely constructive and important. He expressed his hope that if elected he would maintain close relations with the EJC, and promised to study EJC’s propositions attentively.