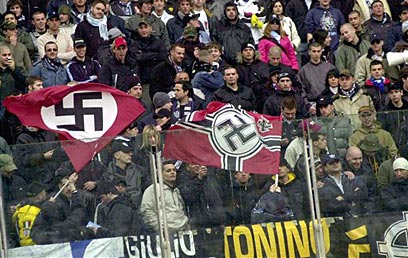 The Stephen Roth Institute for the Study of Contemporary Anti-Semitism and Racism presented its annual global anti-Semitism report for 2011 Wednesday, as Israel readies to mark Holocaust Remembrance Day.

The report noted an increase in cases involving harassments and violence against Jews worldwide, singling out western Europe, Australia and Canada as three of the places most affected by the trend.

Nevertheless, the Tel Aviv University based institute found that on average the number of verbal threats and vandalism cases against Jews were down 27% in 2011 with 446 incidents compared to 614 in 2010.

The United Kingdom, France and Canada recorded an overall drop in hate crimes; Belgium, Australia and Ukraine demonstrated a similar number of incidents as in 2010 and Belarus and Lithuania saw a rise in anti-Semitic acts.

The data further indicated a rise in physical violence against Jews and Jewish institutions, noting an escalation in their brutality as well.

According to the report, in 2011 42% of hate crimes against Jews were committed against individuals, while 20% saw synagogues targeted, and 6% targeted schools and community centers. In addition, in 14% of the cases Jewish cemeteries were vandalized and in 18% of the cases private property was vandalized.

The data further segmented the nature of the assault, saying that firearms were used in 5% of cases, 17% involved verbal threats, 57% of hate crimes involved vandalism, and 1% involved arson.

The Stephen Roth Institute further found that France held the dubious record for most hate crimes against Jews in 2011 – 114.

The UK was second, with 105 reported cases; followed by Canada, with 68. Australia saw 30 reported cases of hate crimes against Jews, followed by Ukraine (16), Russia (15) the United States (13), Lithuania (6), Argentina (5), Switzerland (5), South Africa (3) and Tunisia, which noted only one reported case.

‘Europe is a ticking time bomb’

Dr. Moshe Kantor, who presented the report, noted that 2011 saw an escalation in violence by Europe’s militant far-Right, which is using social media platforms to spread its anti-Semitic agenda.

Such sites, he noted, perpetuate the notion of a supposed global “Jewish conspiracy” that is responsible for every international event.

Kantor warned that “Europe is a ticking time bomb. Anti-Semitism as well as hatred towards Jews and other minorities can erupt and sweep through Europe. Fighting anti-Semitism should be a value shared by all.”

He identified what he called “two triggers” which he said had the most impact on the frequency and nature of hate crimes – the situation in the Middle East and internal European issues.

“Any developments in the Middle East – for instance, if Israel was to strike Iran – will have ramifications in Europe. Such a thing could spark grave anti-Semitism in every (European nation).”

Hatred towards Jewish communities across Europe, he added, is being underestimated by the governments. “About 20% of Germans harbor anti-Semitic notions. In smaller communities (throughout Europe) it’s an overwhelming majority of 92% – and its not being dealt with. This is why it’s so extremely dangerous.”