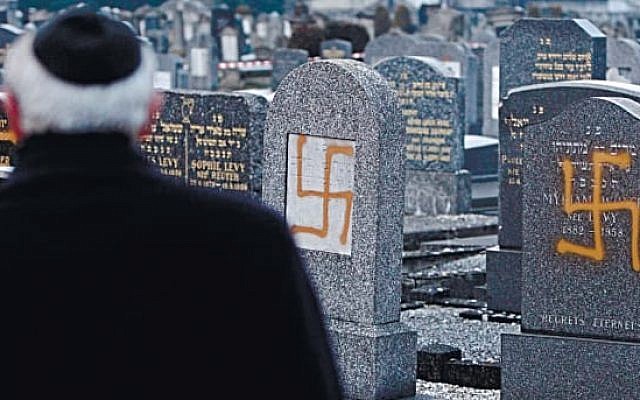 European Jewish Congress President Moshe Kantor has warned European leaders to act now to prevent what he called a “tsunami of hate” if the situation in the Middle East escalates. Kantor spoke at a press conference held by the Kantor Center for the Study of Contemporary European Jewry at Tel Aviv University, in cooperation with the European Jewish Congress (EJC). The center releases an annual survey of global anti-Semitic incidents. This year’s results show a slight decrease in overall incidents, but a rise in violent attacks on Jews.

“The Middle East conflict has been imported into Europe and serves as an excuse for anti-Semitic attacks against the Jewish citizens of Europe,” Kantor said at the press conference. “This is absolutely unacceptable and should be removed at all levels, from enforcement authorities to government officials. There should be zero tolerance for the idea that it is natural that what happens in the Middle East will affect the Jews of Europe or elsewhere.”

“This issue needs to be dealt with immediately or there could be a tsunami of hate if there is an escalation in the Middle East or an attack on the illegal Iranian nuclear weapons program. The barbaric murders in Toulouse should serve as a wake-up call for action. We know the problems and the solution, now we require the implementation,” the EJC president added.

Kantor outlined some of the steps that he will present to European leaders and officials, which the EJC will meet during the year, as part of a pan-European program to implement measures to prevent future anti-Semitic attacks. “Concentrated attention should be given to legislative efforts that will define and protect our community from violent crimes and will ban any form of incitement, which we all know is flourishing in the mosques of Europe,” he said, adding: “Security measures should be implemented and enforced to protect Jewish communities across Europe. Creating public awareness of this threat, as well as a concerted education program can also become a useful preventive tool. Intelligence sharing and intelligence cooperation, between the various enforcement authorities across Europe is vital for prevention.”

The EJC president praised the French government in their handling of the events in Toulouse and said it had set an example for others in Europe.

Kantor also related to the controversial poem by German writer Günter Grass (pictured left), saying: “Incitement can be a major contributor to the deterioration of the situation. It is a slippery slope when someone like Gunter Grass expresses such twisted and delusional ideas. Grass is laying the seeds for blaming the Jews for many of the ills of the world and from here the road to anti-Semitic expressions and action is short.

“While freedom of speech is vital, people like Grass must realize that their comments are not made in a vacuum and were made on the back of findings by the German Bundestag, in a recently released report, that 20 percent of Germans hold anti-Semitic views. These types of comments contribute to the hate against the Jews of Europe by singling out the Jewish State, therefore giving people an excuse to carry out anti-Semitic violence,” the Jewish leader declared.