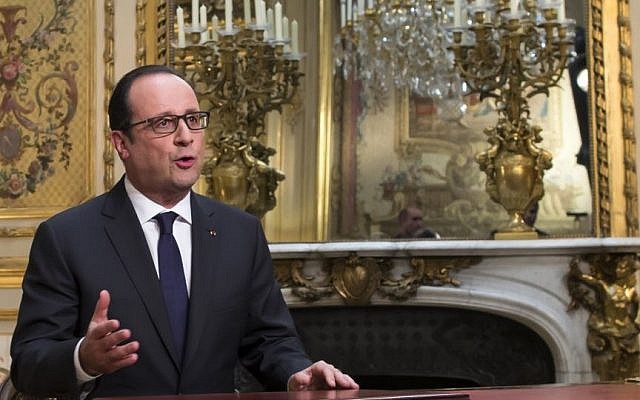 Jewish community leaders this week congratulated France’s new president on his election as Benjamin Netanyahu said he’s sure relations with Paris will remain “strong and friendly”.

Socialist Party leader Francois Hollande will take over the reigns of power next week after winning nearly 52 percent of the vote in Sunday’s presidential run-off with incumbent Nicolas Sarkozy.

The election of the 57-year-old – who has set out to increase taxes on high earners, raise the minimum wage and create more teaching jobs – came just two week after he met a European Jewish Congress delegation for talks described as “very constructive”.

The CRIF umbrella body of French Jewry welcomed the election and offered its “warm congratulations” while EJC President Moshe Kantor said: “I believe we have a sympathetic ear in the new French leadership and we look forward to continuing this relationship with the new president.”

Antisemitism in Europe, Iran’s nuclear programme and the Middle East peace process were among the issues on the agenda at the meeting, which was also attended by Board President Vivian Wineman. The Board said that the president-elect “confirmed that he opposes the participation of Hamas in any Palestinian administration as long as it did not recognise Israel and commit itself to peace with her”.

Speaking this week, Board chief executive Jon Benjamin said: “Our counterparts at CRIF have enjoyed close and cordial relations with the outgoing President Sarkozy and it was clear from the recent meeting with Monsieur Hollande that he too values these links. We hope that France will remain as resolute in addressing the threat of a nuclear Iran, and fair and evenhanded in its relations with Israel. The reported statements of Monsieur Hollande condemning all forms of boycotts directed at Israelis are very welcome.”

The Rabbinical Centre of Europe, meanwhile, issued a warning over anti-Semitism. “We alert the president-elect on the resurgence of antiSemitism and insecurity in Europe and France in particular and the need to vigorously fight it regardless of its origin. We express our deep concern about the growing intolerance of religious freedom in everyday life, respectful of republican values.”

As he prepared to leave the Elysee Palace after failing to win a second term, there was also high praise this week from within the community for Sarkozy. “I would like to thank President Sarkozy for his work, not just for the French Republic, but also in his efforts towards the Jewish community,” Kantor said.

“I would like to reiterate our gratitude for his friendship and solidarity with the Jewish people after the recent murders in Toulouse.”