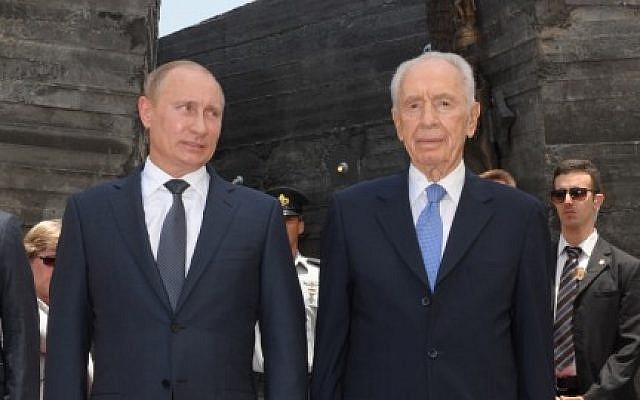 Russian President Vladimir Putin and his Israeli counterpart Shimon Peres have unveiled a monument in the Israel coastal city of Netanya in honor of the Soviet soldiers who freed central and eastern Europe from Nazism and liberated the German death camps in occupied Poland during World War II. The event was co-sponsored by the Russian Jewish Congress and attended by a number of Jewish leaders, including RJC President Yury Kanner, European Jewish Congress President Moshe Kantor, and World Jewish Congress Secretary-General Dan Diker, who represented WJC President Ronald S. Lauder. Also present were a dozen of Red Army veterans.

“This is an opportunity to thank the Red Army,” said Peres. “Had it not defeated the Nazi beast then it is doubtful we would be standing here today. In World War II the Soviet Union prevented the world from surrendering.”

Putin thanked Peres for his words: “What I just heard has warmed my feelings toward the Jewish people and especially toward Israel,” he said. “I am thankful for everything that has been done to commemorate those who died during World War II.” He said Russia had put an end to the Holocaust, which had been one of the darkest chapters in history.

The Victory Monument was a joint initiative of Israel and Russia implemented by a committee with members from both countries. Its initators highlighted the fact that it marks the first time that a state has erected a war memorial to honor another state’s soldiers. The monument consists of two parts. The first is a tunnel-like passage made of black concrete symbolizing the hardships and sacrifices of the war. It leads to the second part, an open space overlooking the sea where two giants wings made of white marble have been erected.

Over half a million Jews fought in the Soviet Red Army in World War II, and an estimated 120,000 of them were killed.

In his speech, the Israeli president also highlighted today’s conflicts in the Middle East. “I am confident that Russia, which defeated fascism, will not allow today’s threats to continue. Not the Iranian threat. Not the bloodshed in Syria,” Peres said.

During a one-to-one meeting between the two men later, he called on the Russian leader to play a bigger role in the region and specifically to use his influence with Tehran to dampen Iran’s nuclear arms ambitions. “I ask as a personal request that you make your voice heard against a nuclear Iran, against genocide,” Peres told Putin. He warned of “a real danger that Syrian chemical weapons will reach the hands of Hezbollah and Al-Qaeda; please act with urgency to stop that unacceptable situation.”

A statement from Peres’s office added: “President Peres presented President Putin with the proposal that Syria will, for two years, be handed over to an Arab League mandate with UN support, until democratic elections can be held in the country.”