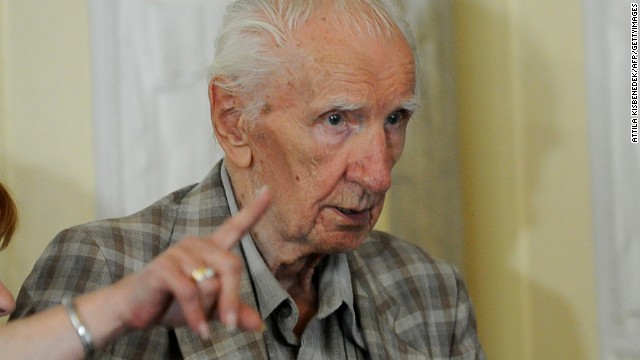 The European Jewish Congress (EJC) called on the Hungarian government and authorities to immediately locate and arrest Laszlo Csatary, who is suspected of playing a key role in the deportation of over 15,000 Jews to Auschwitz in 1944, many of whom were subsequently murdered.

“The Hungarian Government has a moral responsibility to do all it can to find and arrest this man as if he murdered thousands of people today,” EJC President Moshe Kantor said Tuesday in a statement.

“His age should be of no consideration. If someone today is suspected of causing the murder of thousands of people then no expense would be spared to bring them to justice, the same resources should be used in this case,” he added.

Csatary was exposed after British newspaper The Sun acting on information from the Simon Wiesenthal Center, tracked the 97 year old man down and confronted him in Budapest. He has since left his property and gone into hiding.

“This case is about justice, and we should not be sidetracked with the age of the suspect or the date of the crimes,” Kantor continued.

“Mass murder should have no statute of limitations.”

In 1948, a Czechoslovakian court condemned Csatary to death in absentia, but he fled to Canada. In 1997, he was forced to flee after he was stripped of his Canadian citizenship.

“With extremism and racism growing in many parts of Europe, including Hungary, his arrest would send an important message,” Kantor said.

“Groups like Jobbik feed off the dark Nazi-era period and to put someone on trial for crimes against humanity which took place during that era would send a clear message that Nazism is a stain on humanity.”