Rabbis And Imams Meet In Paris To Ease Interreligious Tensions 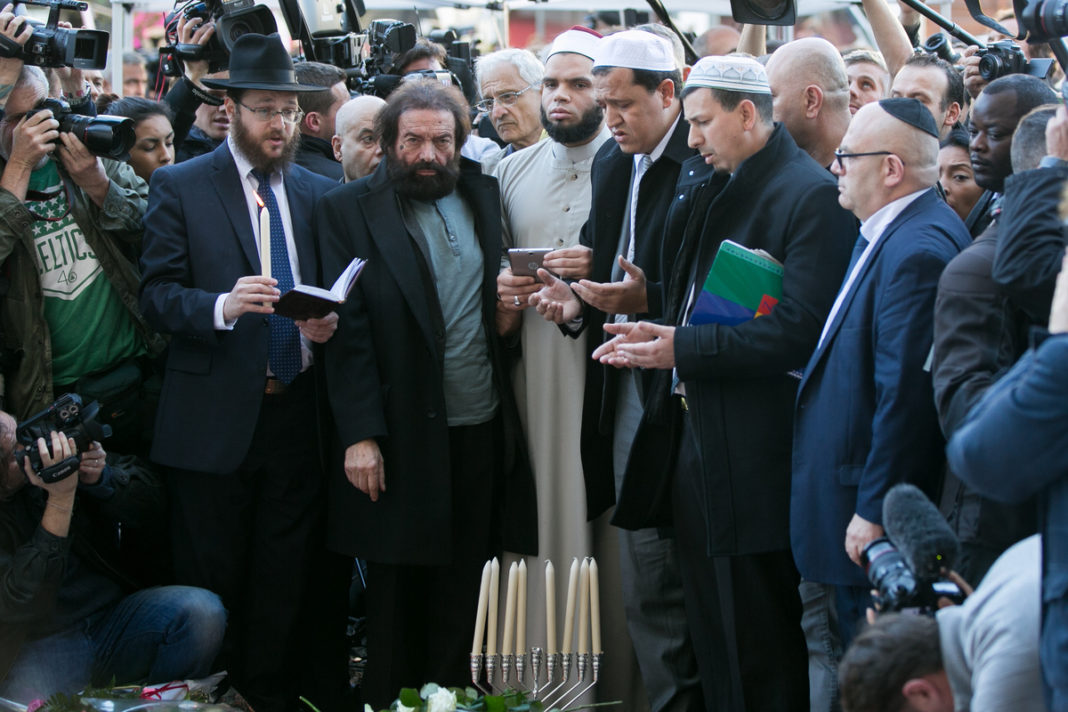 Guests at the Paris Hilton hotel had no idea what the fuss in the luxurious lobby was all about. Last Tuesday some 20 armed police officers guarded the entrance to the lobby. Experienced observers might have also noticed Shin Bet security service officers examining the passersby.

Still, it was a strange sight. Eighty senior religious officials, half of them Jewish and the other half Muslim, formed a tight group with their beards, yarmulkes, black hats and suits, jellabiyas, hijabs and turbans. The atmosphere was relaxed and friendly. One of the men introduced himself with the words, “Salam aleikum, I’m the British mufti.”

“Pleased to meet you, I’m the Chief Rabbi of Belgium,” came the cordial answer.

Suddenly several policemen entered the lobby and one of them whispered something to one of the organizers. A rabbi said, “Yalla, lets go,” out loud, and the group left the place, toward the Hotel de Ville, the breathtaking 14th century Paris municipality building. Moshe Kantor, president of the European Jewish Congress that unites 42 communities then welcomed the guests of the special convention of European Muslim and Jewish leaders:

“We, Muslims and Jews, stand together and tell our rivals: ‘You cannot change our culture, tradition and religion.’ Whoever wishes to tear us away from our tradition tears away a rich mosaic that is the base of Western society.”

Kantor was addressing the common struggle of the communities against European efforts to ban ancient rituals such as circumcision and kosher slaughter of animals.

But there are other reasons for the convention: the tension between the communities worsened recently when a rabbi and several Jewish students were attacked in Berlin by a group of Arab youths. The Muslims, too, suffer from harassment from the extreme right and report a wave of anti-Islamic phobia in the continent.

Two of the tribal elders sat next to each other in the first row: Yitzchak Haleva, the chief rabbi of Turkey, and British Imam Abdul-Jalil Sajid. “We must find a solution to the threats against our two religions,” Haleva said. “Anti-Semitism and Islamophobia threaten not only the future of Europe, but might bring on the destruction of the entire human race.”

Sajid responded by saying: “We’re cousins in blood and brothers by fate … Only dialogue can help us overcome our differences.”

Moshe Sebbag, the rabbi of the Grande Synagogue de Paris, came to “talk and listen, in the hope of creating a new, better world,” but notes that the good atmosphere does not reflect reality: “There are extremist mosques out there that don’t allow the younger generation to think freely and fill their minds with all sorts of ideas,” he says. “Our role is not to despair. That’s the difference between human beings and beasts: We can talk.”

His colleague, Florence’s chief rabbi, Yosef Levi, adds that “we cannot allow the tensions in the Middle East to reflect on our communities. We have to live in peace here, in a pluralistic Europe.”

The next generation was also present. These rabbis and Imams speak perfect English, and are adamant they will cooperate despite the difficulties. Austrian Ilya Zisrovski established the “Muslim-Jewish Committee” three years ago as a “project intended to bring together the next generation.”

A hundred representatives from 35 countries attended the committee’s two conventions, including Imams from “Iran, Saudi Arabi, Lebanon and Indonesia who take a personal risk.”

Zisrovski speaks German with Mussa El-Hassan Diab, who established the “Imam training program,” in Osnabruck, Germany. “The program is for imams arriving in Germany from places like Morocco and Turkey,” he explains. “They understand religious needs but are unaware of the lifestyle of young Muslims in Germany. We try to bridge this cultural gap and through them reach the younger generation.”

Still, it’s not always easy to be a liberal Muslim leader: “I was criticized when I wrote in an Austrian newspaper that there is anti-Semitism in the Muslim community in Austria – but the truth must be told.”

This “truth” was witnessed by Rabbi Avraham Weill from Toulouse, where four Jews were murdered last March. “In Toulouse there is no contact between the two religions,” he says. “Unfortunately, there are extremists there who cannot hear or understand. There’s an atmosphere of fear.”

The six-man Israeli delegation sat together during lunch. They arrived as observers to learn from their European colleagues and share their experience from the stormy Middle East. Sheikh Samir Aasi from Acre says that “yes, there is an argument, and there are issues we disagree on, but religion is a symbol of love and peace, and that’s why we’re here to sit and talk.”

Mohammed Kiwan, Imam of Majd el Krum, agrees: “If this convention prevents even one act of hostility – that will be enough. But I’m positive it will achieve much more than that.”

Rabbi David Abuhatzera of Haifa shared the experience of preventing tension in his city through dialogue. Rabbi Shimon Elmaleh of Nesher was moved to see the Jewish and Muslim representatives holding discussions: “It proves that we have an instrument that needs to be filled with content. Ultimately, we all have but one God.”