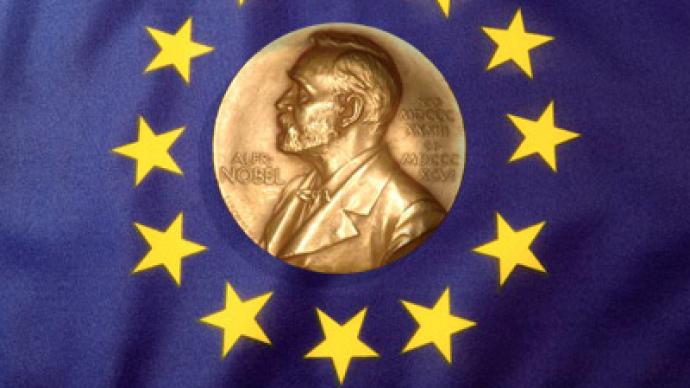 The European Union won the Nobel Peace Prize for its long-term role in uniting the continent, the Norwegian Nobel Committee said on Friday, an award seen as morale boost for the bloc as it struggles to resolve its debt crisis.

Following are reactions to the award:

“It is also encouragement for all of us, to continue on the path to a united Europe, that is to say, to stick to the ever closer ties on our continent and to develop Europe despite some difficulties and problems which must yet be overcome.

“As Europeans we all have reason to be proud today. I am proud, and I wish for God’s blessing for us on our further path to a united Europe.”

“Europe carries on despite the crises. It’s not a long calm river, but it is consolidating.

“I think all the heads of state and populations will take this award as an encouragement. I am very emotional. The last three decades have been very difficult.”

“That is a fantastic decision which makes me proud and happy. European integration is the most successful project for peace in history.

“Freedom and Peace have grown out of the ruins of two devastating world wars and erstwhile enemies became good friends and inseparable partners.

“The Nobel Prize is a great incentive at this particular moment in time to solve our own problems, to be an example with our European model of cooperation and to strengthen our European efforts for a peaceful evolution of the world.”

“This shows that the European project continues to inspire the world even today. It’s a project which started as a dream of a handful of politicians looking for peace and prosperity for all of their fellow citizens that has grown to a powerful symbol of cooperation and progress.

“Europe, a continent that was once taken apart by terrible wars, is thanks to the European Union today a symbol of peaceful debate and conflict resolution to the whole world.

“In these difficult economic times, where the European Union is confronted with the greatest challenges in its existence, the Union shows that we can only via mutual solidarity and dialogue can make tomorrow better than today.

“The Prime Minister is also proud. Belgium, as one of the founding members of the EU has always been a front runner and source of inspiration in the process of European unification.

“To make Europe loved by its citizens, they have to find themselves in Europe. Let the prize be an inspiration to come closer to this goal. The European Union has once again to bring hope and make people dream.”

MARTIN CALLANAN, LEADER OF THE EUROSCEPTIC CONSERVATIVES AND REFORMISTS PARTY IN THE EUROPEAN PARLIAMENT

“The Nobel committee is a little late for an April fools joke. Twenty years ago this prize would have been sycophantic but maybe more justified. Today it is downright out of touch.

“Presumably this prize is for the peace and harmony on the streets of Athens and Madrid.

“The EU’s policies have exacerbated the fallout of the financial crisis and led to social unrest that we haven’t seen for a generation.

“The Nobel Peace Prize was devalued when it was given to newly-elected Barack Obama. By giving the prize to the EU the Nobel committee has undermined the excellent work of the other deserving winners of this prize.”

“This is the most striking example of the prize having been appropriated by the Norwegian political elite. The elite have no interest in Nobel.”

“The EU isn’t doing anything in Syria and it’s quite hypocritical that they get a prize. They don’t have a lot of influence in the world.”

“Awarding the Nobel Peace Prize to the European Union is a particularly happy and significant decision. It honours the peace-fostering role of European togetherness, which has fostered peace for the European continent and for other regions of the world.

“The awarding of the peace prize is also a clear signal to those in Europe, who in alluding to supposed national interests, endanger the work of European unity.”

“They’ll be cheering in Athens tonight, won’t they.”

“We can of course laugh at this, and there are many problems in the EU. It is certainly not a perfect union but it is a strong message that a lot has gone right also since the creation of the EU.”

“I am delighted at the news that the European Union has been awarded the 2012 Nobel Peace Prize, in recognition of its work on reconciliation, democracy, promotion of human rights and in enlarging the area of peace and stability across the continent.

“In the countries of the EU, historic enemies have become close partners and friends.

“I am proud to be part of continuing this work. The creation of the European External Action Service has enabled us to develop a comprehensive approach to better promote Europe’s core values throughout the world.

“I will continue to work tirelessly to drive this process forward.”

“I would like to offer my warmest congratulations to the European Union on being awarded the Nobel Peace Prize.

“The European Union has played a vital role in healing the wounds of history and promoting peace, reconciliation and cooperation across Europe.

“It has contributed to the advancement of freedom, democracy and human rights across the continent and beyond.

“From the outset, NATO and the European Union have shared common values and helped shape the new Europe. The European Union is a unique and essential partner for NATO. I look forward to strengthening our strategic partnership further, as agreed by our two organisations, to promote peace, stability and security.”

“We are all very proud that the efforts of the EU for keeping the peace in Europe are rewarded.

“Despite some gloom in the economy in Europe, still this is a great day for Europe. This Nobel Peace Prize has apparently been awarded for the contribution of the European Union over the past 60 years to the peace and reconciliation and democracy and human rights. I am very proud of these European values which are also universal human values. This is a proud day for every European.”

“This Nobel Peace Prize is for all EU citizens. We in the European Parliament are deeply touched. The European Union has reunited the continent through peaceful means and brought arch enemies together. This historic act of reunification has been rightfully recognised.

“The EU’s principles and values of reconciliation can serve as an inspiration to other regions in the world. From the Balkans to the Caucasus, the EU serves as a beacon for democracy and reconciliation.”

“This goes to show that the Norwegians really do have a sense of humour. The EU may be getting the booby prize for peace because it sure hasn’t created prosperity. The EU has created poverty and unemployment for millions.

“In the last two years the EU has caused huge animosity between the countries of Northern and Southern Europe. Just look at Frau Merkel being welcomed with Nazi flags in Athens, and German newspapers slagging off the Greeks as work-shy wonders.

“After watching European Council President Van Rompuy cheerleading for war in Libya with Colonel Gaddafi, this idea of the EU getting a Nobel Peace is ridiculous.”

“It gives the EU a morale boost at a time when it has been shaken to its core. The prize is an encouragement to the EU to continue its peace-generating integration work.

“It is a reminder to eurosceptics to consider the real merits of the union they so despise, and it is an appeal to Europe to finally become a serious strategic player in the world.”

“The European Jewish communities have felt the many evolutions, revolutions and convulsions on our continent.

“The Nobel Peace Prize sends a very strong message that the European Union’s achievements of turning a continent that has known so much bloodshed and conflict now deals with its challenges in a peaceful and tolerant manner.”

EUROPEAN COMMISSION PRESIDENT JOSE MANUEL BARROSO ON TWITTER, WHERE HE HAS 14,900 FOLLOWERS AND RISING:

“It is a great honour for the whole of the EU, all 500 million citizens, to be awarded the 2012 Nobel Peace Prize.”

“This is an important and right decision by the Nobel Prize Committee and a big encouragement for the people in Europe. It comes at the right time for closer togetherness in Europe and it strengthens those powers that are pushing for closer integration in the European Union.

“It’s a clear rejection of nationalism and the sole pursuit of national interest. The Nobel Prize Committee deserves respect for this decision.

“And all levels of decision making in the European Union must take this high award as incentive to continue with their fullest power the path to closer integration.

“In this way the European Union can serve as a role model for other regions for a socially, economically, culturally and politically successful community.”

“It is right that this extraordinary effort that has been accomplished by the Europeans and their leaders to establish a lasting peace on their continent – historically ravaged by war – is rewarded and honoured.”

CARL DEVOS, POLITICS PROFESSOR AT THE UNIVERSITY OF GHENT

“It’s one of the most intelligent awards that has been given and it surely is a celebration and an official recommendation for the importance that the European Union has in keeping world peace, especially in Europe.

“As a military force, the European Union is quite weak and it has used that disadvantage to turn it into an advantage and to show the world that you can be important and have influence by just talking and negotiating and renegotiating with people.”