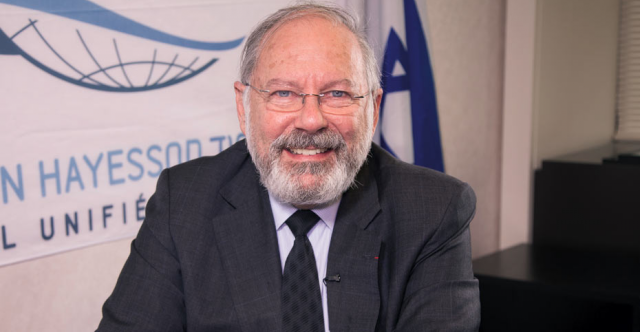 Richard Prasquier, President of CRIF, the umbrella representative group of the Jewish community in France, the largest in Europe, could be set to become the next president of the European Jewish Congress (EJC), the organisation representing the interests of some 42 Jewish communities in Europe.

At a meeting of the EJC’s General Assembly scheduled to convene in Brussels on Wednesday, 85 representatives from diverse Jewish communities will be tasked with choosing by secret ballot between the Russian incumbent president Moshe Kantor and his French rival.

Kantor, a businessman and philanthropist, was elected as head of the organisation in 2007, succeeding its former French president Pierre Besnainou, before being re-elected for a four-year term in 2008, when he similarly faced off against French challenger Roger Cukierman, another former CRIF president. Kantor is able to stand for the third time, since the EJC’s constitution does not legislate a fixed mandate for the president.

The election of the president of EJC comes at a particularly urgent time for the organisation in light of a surge of anti-Semitic activity in Europe, the resurgence of extreme-right parties in several countries as well as attacks against religious practices, notably shechita (ritual slaughter of animals) and brit milah (circumcision).

Prasquier has criticized the EJC of not having played its full role over in recent years.

“In a European climate which is likely to become more and more difficult, I would like the European Jewish Congress to play a role of coordination and action, of supporting the diverse Jewish communities of Europe which are faced with a variety of worrying threats,” he asserted in an interview with EJP.

“I predict a worsening of the situation.”

“My five years of experience at the head of the CRIF has provided me with a knowledge of on the ground action, a knowledge of the problems that might confront the Jewish community in France – which aren’t necessarily the same facing other communities, but on the ground action is essential. And in addition to that, there is action with political and public authorities”.

Prasquier claims to have met many leaders of Jewish communities in Europe. “All of them has their specific themes, their particular problems. But the majority think that the situation will not improve and would like to be assured of the support of the European Jewish Congress, which must be an “amplifier”.

“It’s also necessary to dedicate time and work to predict what might happen and a priority must be procuring help to safeguard Jewish institutions and buildings, synagogues, schools…, an unfortunate problem that’s proving very important for a large number of communities and not only those in the front line of news reporting like in France.”

“The problem of securing physical locations is also an issue for relatively peaceful communities,” he added.

“The EJC must be responsible for all this, it must be a representative and therefore be able to intervene,” Prasquier stressed, regretting that the EJC had not worked in cooperation with a number of communities with whom there had been no real contact. ” Apart from the occasional photo opportunity…what counts are constant interactions, and these did not happen,” he said.

According to him, the president of the EJC must originate from an EU member state. “It’s very important because the EU represents a large majority of the constituent members of the EJC.”

“Today, all decisions are taken at the level of the European institutions in Brussels, where the EJC must equally be based.”

Founded in 1986 as an offshoot of the wide-reaching World Jewish Congress (WJC), the EJC has its headquarters in Paris.

Prasquier explained that, contrary to what has been the case over the course of recent years, the EJC must work in cooperation and in consultation with other Jewish organisations and institutions, citing the Joint and the Claims Conference as notable examples.

But, it lust also work with representative organisations in other countries and organisations providing support to Israel. “Anti-Zionism and anti-Semitism are the biggest problems experienced in certain European countries,” he added.

Aged 67, the CRIF president is a cardiologist by training. Born in Gdansk, Poland, he left the country for France with his family in 1946 after the Kielce pogrom against the Jews.