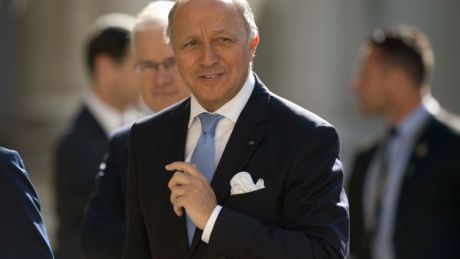 A European Jewish Congress delegation, led by President Dr. Moshe Kantor, met with French Foreign Minister Laurent Fabius in Paris yesterday amid reports that anti-Semitic attacks in France have risen by 40% this year.

Dr. Kantor thanked the French Government for its ongoing response to anti-Semitic attacks. “However the rise in the number of attacks demonstrates that the perpetrators have not yet received the message.” Kantor said. “There is also a great concern that an escalation in the Middle East or a preventative military attack on Iran’s illegal nuclear weapons program, either by Israel, the US or joint forces, could trigger violent attacks among these extremists against the French Jewish community.”

Kantor also raised the issue of the strengthened sanctions, intended to convince the Iranian regime to halt its efforts towards a nuclear weapons capability

.
“The international community must give a firm and final ultimatum for talks. At the moment, Iran feels safe because the talks are ongoing,” Kantor said. “The idea that while talks are ongoing and sanctions are strengthened, then Iran will not move forward on its nuclear and weaponization programs has been proven false. The IAEA reports, coupled with recent intelligence assessments have demonstrated that Iran is racing forward more than ever towards a nuclear weapon.”

“Talks can not be open-ended. Iran needs to hear an increasingly stronger message and firm red lines from the international community until it halts its weapons program. In less than a year, Iran will have the ability to enrich its own uranium.” Foreign Minister Fabius said he shared these concerns and agreed with the overall assessment.

After the recent attack on Israeli tourists in Bulgaria, Kantor also discussed the growing threat of Hezbollah against Jews and other civilians and how France could join the effort to thwart its activities in Europe.

“To proscribe Hezbollah’s activities in France and Europe would assist the liberal forces in Lebanon. At the moment, according to intelligence experts, including the U.S. Government, Hezbollah is able to recruit and raise money in Europe freely,” Kantor said. “Not only does this funding contribute towards the repression inside Lebanon, its global terrorist activities, but it also helps the Syrian regime with its brutal and bloody repression.”

“France’s historic role in Lebanon and the region means that such a move would have a great effect and send a strong and moral message.”

Foreign Minister Fabius said that all European leaders are very much aware of this issue. However, he said, they are waiting for the results of the investigation in Bulgaria. The question about Hezbollah will be raised again as soon as we have some answers.

Kantor also handed the French Foreign Minister a copy of the European Council on Tolerance and Reconciliation’s (ECTR) Model European Statute for the Promotion of Tolerance. The model law, written by prominent European jurists, is designed for adoption by the respective national legislatures in the European Union Member nations.

Foreign Minister Fabius expressed interest in the document and promised that he would study it very carefully.