Bomb Attack On Jewish Center In Malmo : Jewish Organizations Call On Sweden ‘To Stand By Its Jewish Community And Give It The Protection It Needs’ 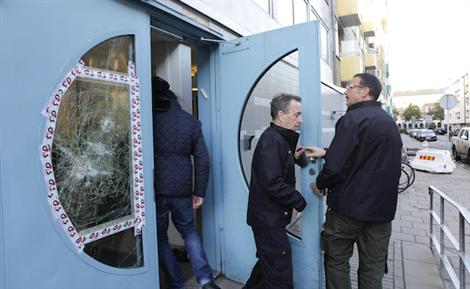 A bomb attack against a Jewish community center in the city of Malmo, in the south of Sweden, was strongly condemned by Jewish organisations and described as a “threat to Jewish life in Europe” following several other anti-Semitic incidents over the continent.

Early on Friday morning, an explosive device was detonated outside the Jewish center that houses apartments, a kindergarten and meeting rooms, and bricks were thrown at its windows.

The explosion was apparently heard several blocks away and cracked the bullet-proof main door of the Jewish Community Centre.

World Jewish Congress (WJC) President Ronald S. Lauder called on Sweden to reinforce the protection of its Jewish sites. “For a number of years now, Malmo has been a hotspot for anti-Jewish activities. The negative climate for Jews there continues to grow. Jews are frightened to wear kippahs or otherwise show their religious affiliation. It is high time that the Swedish authorities defend the rights of their Jewish citizens and give them the protection that is necessary, » he said.

Lauder reminded that only a few days ago, several hundred people took to the streets to protest against the harassment to which Jews in this city are regularly subjected.

“There is real fear among the Jewish population of Malmo, and it is growing – not least because not a lot has been done to address the issue,” Lauder said.

Malmo’s Jewish community has endured a number of attacks in recent months and years, including verbal abuse as well as the desecration of a synagogue and a Jewish cemetery.

“The explosion of Malmo follows an unprecedented wave of attacks against Jews and Jewish targets in recent months, since the murders in Toulouse,” said European Jewish Congress (EJC) President Moshe Kantor, mentioning an attack on Jewish schoolchildren in Paris, a man and his six year old daughter in Berlin and a rabbi in Vienna.

“While leaders are trying to ascertain the barriers of freedom of expression after the anti-Islam film, Jews are in grave danger, and this is not receiving the same level of attention. While discussing different rights it should be remembered that the right to life is above all and there are those who wish to rob the Jews of even this right in Europe.”

“The authorities need to take urgent action on a national and pan-European basis,” Kantor said, adding however that the Mayor of Malmo, whiose comments have been percieved as legitimizing anti-Semitic attacks, «has created an atmosphere where Jews feel threatened without sufficient protection or understanding.”

“We call on the local authorities to take all measures possible to protect the Jewish community in Malmo and our institutions,” said Lena Posner, President of the Jewish Community in Sweden, “There must be a zero tolerance against acts of hate and anti-Semitism in the city.”

The Simon Wiesenthal Centre (SWC) expressed its solidarity with the 700-member Jewish community and its Rabbi, who has been incessantly targetted.

According to the SWC, Rabbi Schneur Kesselman and his children have been physically and verbally assaulted some fifteen times in the last year. « This Yom Kippur, his newly purchased car was vandalized with engravings including “Palestina”, it said.

Following several anti-Semitic incidents in Malmo, including a a firebombing of the synagogue and assaults on a pro-Israel demonstration, the Simon Wiesenthal Centre met in December 2011 with the city’s mayor, law enforcement officials, the Jewish community and Muslim and Roma leaders.

The Centre also advised the Minister that – due to the continued provocations of Malmo Mayor, Ilmar Reepalu, in constantly introducing the Middle East conflict into local discourse and thereby exacerbating tensions among the 70,000 Muslim community – it was imposing a travel advisory on Malmo.

Samuels, in March 2011, accompanied US President Obama’s Special Envoy on Antisemitism, Hannah Rosenthal, to meetings with Muslim and other minority leaders in the city.

The Wiesenthal Centre als felt vindicated in that physical security of the synagogue is now partly provided by the central government in Stockholm. “Yet theMayor’s continued indifference, the ban on cameras due to privacy considerations and the lack of a police presence has not prevented this new attack, » the Centre said, appealing to the Sewish authorities « to provide permanent police surveillance as in other endangered communities across Europe.”

“We are monitoring the situation and, especially, the reaction of the Mayor … Whether it was Ahmadinejad’s Yom Kippur hate-speech at the United Nations or local sentiment fed by Islamist or other racist websites, we await rigourous

condemnation and expressions of sympathy from Muslim leaders and a prompt prosecution of the perpetrators. In the meantime, the Centre’s travel advisory remains in place”, said Shimon Samuels.