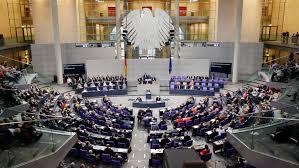 The Bundestag, the German Parliament, on Wednesday approved a bill to keep male infant circumcision legal after a Cologne court ruled in May that the practice amounts to bodily harm.

The government proposed the law following heavy criticism of the court ruling by Jewish and Muslim groups.

Jews in particular consider ‘brit milah’, the male infant circumcision, an ancient and essential part of their religious tradition.

Months of debate on the cultural and religious tradition of circumcision in Germany followed. Nowhere else in the entire world has this debate been held “with such acrimony, frostiness and at times brutal intolerance,” Dieter Graumann, head of the Central Council of Jews in Germany, said at the time.

The new law, passed with 434 to 100 votes, grants parents the right to authorize the circumcision of their sons by a trained practitioner.

Once the boy reaches six months of age the procedure needs to be performed by a doctor.

A cross-party minority in Parliament had proposed that parents should have to wait until their son is 14 so he can give informed consent for the procedure.

Months of debate on the cultural and religious tradition of infant male circumcision in Germany followed. Nowhere else in the entire world has this debate been held “with such acrimony, frostiness and at times brutal intolerance,” Dieter Graumann, head of the Central Council of Jews in Germany, said at the time.

The Cologne ruling led to a good deal of legal insecurity. In practice in the past, it had always been undisputed that parents could agree to a circumcision that is not strictly necessary from a medical point of view.

In July, the German Bundestag began debating the difficult issue. Across party lines, lawmakers agreed that Jewish and Muslim religious life must continue to be possible in Germany and appealed to the federal government to draw up legislation to this effect.

The Central Council of Jews in Germany, which has announced it will introduce special training courses, says Germany already has four mohels, who practice the circumcision, some of them trained rabbis and doctors.

Muslims also practice male circumcision – however, there is no strict definition as to the age at which circumcision can be carried out; in practice it can take place at any time before about the age of 14.

European Jewish Congress President, Moshe Kantor, welcomed the bill passed in the German Parliament as “a victory for religious freedom and tolerance in Germany.”»

“The bill, which protects the rights of the Jewish community to continue religious circumcision, is moral and just.”

“The German Government deserves a lot of credit for finding an appropriate formula which takes into account various concerns but affirms the right of Jews, and other religious minorities, to continue these traditions vital for our community’s sustenance,” he added.