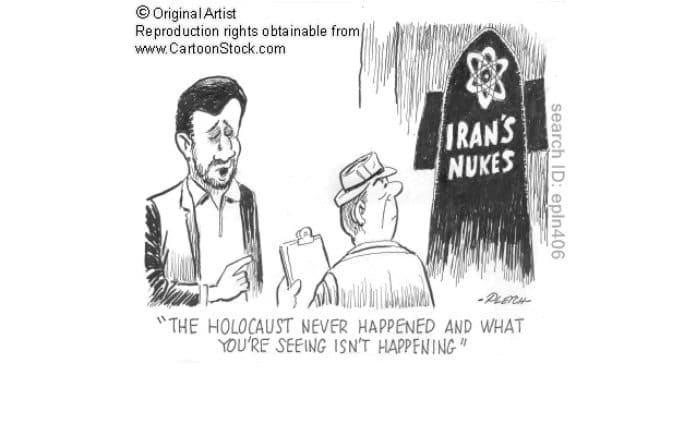 European Jewish Congress President Moshe Kantor called the international community’s attention to the a festival of caricatures in Tehran initiated by the Iranian regime to deny and ridicule the Holocaust and the Jewish People.

It is a repeat of similar event held in the country in 2006.

“Once again the Iranian regime is inciting against the Jewish People, denying genocide while actively preparing the means, through their illicit nuclear weapons program, to threaten the Jewish state with violent destruction,” Kantor said.

“We expect little of such a rogue regime. However, we do expect the international community to look at this latest incitement and place it within the context of their active pursuit of weapons of mass destruction,” he said.

“One can not separate the rabid incitement, the calls for ‘death to Israel’ and the means to pursue this aspiration,” he added.

Tehran’s efforts to trivialize Nazi Germany’s near-annihilation of European Jewry, which extend into virulent and explicit Holocaust denial, have caused concern among foreign policy analysts that the regime might be ideologically fixated on promoting anti-Semitic violence.

Analysts have cited Iran’s direct links to the 1994 bombing of a Jewish center in Buenos Aires, which killed dozens of people, as evidence that Tehran is specifically committed to globally targeting Jews.