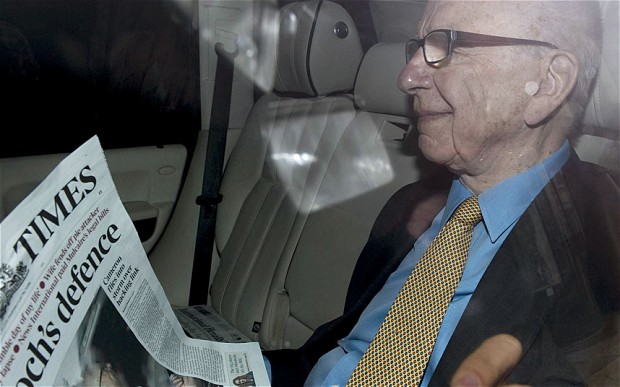 Rupert Murdoch tonight issued a public apology over a “grotesque” Sunday Times cartoon after the newspaper was accused of anti-semitism.

Amid a storm of global condemnation, the 81 year-old media mogul offered the “major apology”, for what he described as an “offensive cartoon” published in one of his major newspapers.

His apology on Twitter came despite the Sunday newspaper launching a staunch defence of the work by leading political cartoonist Gerald Scarfe, 76.

The cartoon, which depicted Benjamin Netanyahu, the Israeli Prime Minister, building a wall using what appeared to be the blood of Palestinians as cement, was published at the weekend, in the first full edition presided over by Martin Ivens, the new acting editor.

The Board of Deputies of British Jews complained to the Press Complaints Commission, arguing the cartoon, was “shockingly reminiscent” of pictures used in “the virulently anti-Semitic Arab press”.

Tonight the Australian-born News Corporation founder apologised, hours after stating that “what I have to say about Sunday Times cartoon will not be on Twitter. Sorry”.

But later in a post to more than 400,000 followers, Mr Murdoch said: “Gerald Scarfe has never reflected the opinions of The Sunday Times. Nevertheless, we owe [a] major apology for [the] grotesque, offensive cartoon.”

Jewish leaders saw a theme of “blood libel,” the persistent myth that Jews secretly use human blood in their religious rituals.

Their anger was heightened over the cartoon being published on a day meant to commemorate the communities destroyed by the Nazis and their allies in the mid-20th century.

Moshe Kantor, the president of the European Jewish Congress, said: “This cartoon would be offensive at any time of the year, but to publish it on International Holocaust Remembrance Day is sickening and expresses a deeply troubling mindset.”

Israel’s parliamentary speaker, Reuven Rivlin, wrote in a letter to his British counterpart John Bercow: “For the people of Israel, this is a cartoon which recalls the dark journalism from one of humankind’s darkest periods.”

Mr Ivens will meet leading figures in Britain’s Jewish community tomorrow to apologise “face to face” in an attempt to stem the backlash.

A source at News International, the newspaper’s publiser told The Daily Telegraph tonight: “Scarfe has been with the paper for more than 44 years and his stuff is well known for being hard hitting at times.

“But some sort of line has been crossed over.”

In a statement released through NI, Mr Ivens said: “The last thing I or anyone connected with the Sunday Times would countenance would be insulting the memory of the Shoah or invoking the blood libel.

“The paper has long written strongly in defence of Israel and its security concerns, as have I as a columnist.

“We are, however, reminded of the sensitivities in this area by the reaction to the cartoon and I will of course bear them very carefully in mind in future.”

A NI spokesman added tonight: “He [Mr Ivens] will acknowledge that the cartoon was of bad taste and was of extremelly bad timing. He will apologise for any offence caused.”

The newspaper had earlier defended the cartoon prior to Mr Murdoch’s tweet, claiming it was “typically robust” and denying that it was anti-Semitic.

“The Sunday Times firmly believes that it is not antisemitic,” it said.

“It is aimed squarely at Mr Netanyahu and his policies, not at Israel, let alone at Jewish people. It appeared on Sunday because Mr Netanyahu won the Israeli election last week.”

Scarfe, one of Britain’s best-known cartoonists whose career with the Sunday Times stretches back to the 1960s, often makes use of blood in his cartoons.

The NI spokesman declined to say if he would face disciplinary action or would continue drawing for the newspaper.

The veteran cartoonist, who has also designed artwork for film, theatre and opera and opening credits of the BBC’s comedy Yes Minister, tonight said he “very much” regretted the timing of his cartoon.

But he added to the Jewish Chronicle that he had not been aware it was Holocaust Memorial Day.