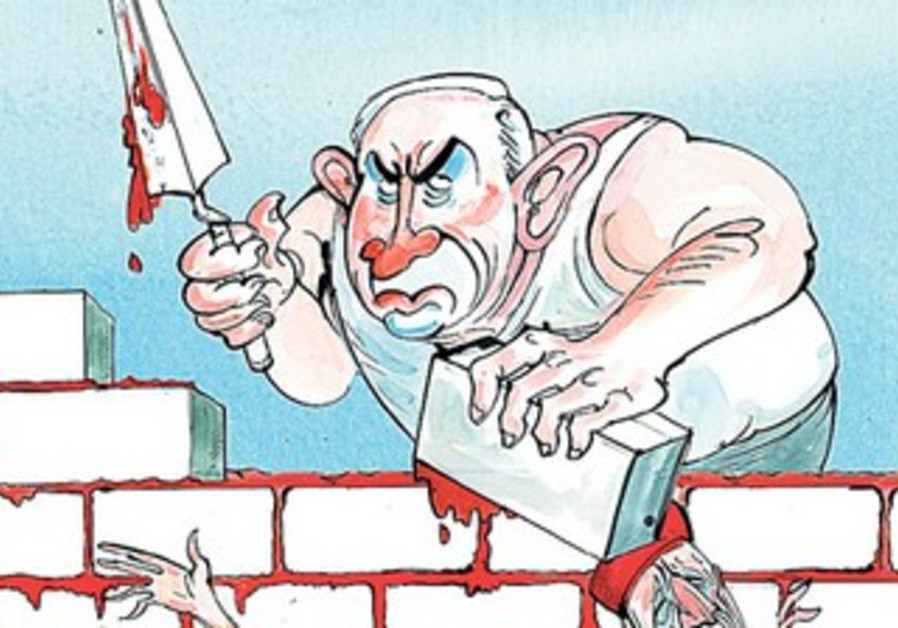 The cartoon included a caption beneath the image entitled “Israeli elections- will cementing peace continue?” Drawn by Gerald Scarfe, the cartoon appeared in the national paper on Sunday.

“Amazingly, as this cartoon was published days after the only democracy in the Middle East, Israel, underwent fully democratic elections, as others in the Middle East were being butchered by the tens of thousands, the Sunday Times focuses its imagination solely on the Jewish State. This contravenes many of the criteria laid out in EUMC’s Working Definition of Antisemitism and is part of a worrying trend to legitimize the growing assault on Israel by opinion-shapers.”

The Sunday Times defended its cartoon in response to charges of anti-Semitism. “This is a typically robust cartoon by Gerald Scarfe,” a spokesman for the weekly said. “The Sunday Times firmly believes that it is not anti-Semitic. It is aimed squarely at Mr Netanyahu and his policies, not at Israel, let alone at Jewish people.”

The publication added that the cartoon appeared on Sunday because that was its first issue since Netanyahu won reelection, and reiterated that it opposes anti-Semitism in all its forms.

British anti-Semitism has made headlines throughout the week after Liberal Democrat MP David Ward accused “the Jews” of inflicting violence on Palestinians on a daily basis,” and questioned how they could do this so soon after their “liberation from the death camps.”

He issued something of a backtrack on Saturday evening, in response to condemnation from his party and a huge backlash on social media. “I was trying to make clear that everybody needs to learn the lessons of the Holocaust,” the MP posted on his website.

“I recognize of course the deep sensitivities of these issues at all times, and particularly on occasions of commemoration such as this weekend [Holocaust Memorial Day],” he said.

He added that his criticisms of Israel “remain as strong as ever.”

Ashton said that the survivors of the Holocaust “remind us of this tragedy that we must never forget.”