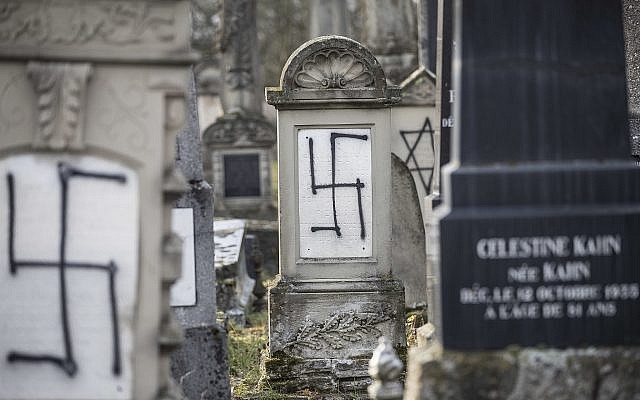 European Jewish Association (EJA) Director General, Rabbi Menachem Margolin, called upon EU leaders to strengthen Europe’s fight against anti-Semitism after a survey released on Sunday by the Center For the Study of Contemporary European Jewry showed that vandalism against Jews has increased by 30 percent last year.

“The findings of the survey are staggering” said Rabbi Margolin. “The EU efforts should focus not only on specific anti -Semitic incidents as horrific as they are, but rather on the increasing legitimacy hate groups are receiving from the European public and the rise of extreme-right wing parties throughout the continent,” he added.

He continued, “Europe is in the midst of a financial crisis which always has been a comfortable ground for fascist and anti-Semitic ideas to bloom.”

“It is time for all of the E.U leadership to take action in order to prevent history from repeating itself.”

According to the annual study by the Tel Aviv University’s Kantor Center for the Study of Contemporary European Jewry, which was published in cooperation with the European Jewish Congress (EJC), global violence and vandalism against Jews have risen by 30% in 2012, with 200 incidents reported in France alone.

These acts, 686 in total for 2012, include vandalism and direct threats on Jewish lives. In contrast to a relative decline in numbers of anti-Semitic acts over the past two years, the report noted that a “correlation was observed between the political strengthening of extreme right parties and the high level of anti-Semitic manifestations including incidents of violence and vandalism.”

Hungary was identified as the European country experiencing the most troubling escalation of anti-Semitic incidents. “There are extremely worrying signs emanating from Hungary at the moment where barely a week passes without an attack on minorities or outrageous comments from extreme-right politicians,” EJC President Moshe Kantor said at a press conference at Tel Aviv University on Sunday.

The report cited three factors to explain the rise: the general increase (58%) of ase of anti-Semitic occurrences in France following the terror attack in Toulouse against a Jewish school, which made 2012 the most violent year since 2004, the rise of the extreme-right parties in several European countries, notably Greece, Hungary and Ukraine, where parties with a distinct anti-Semitic line have started vying for power, and Israel’s November 2012 Operation Pillar of Defense against Hamas which saw an increase in anti-Semitic activities worldwide.

Poland also registered a rise in vandalism incidents, mostly aimed against Jewish cemeteries and Holocaust memorials, according to the report.

The incidents registered in 2012 include 273 attacks against Jews, some of them student and teens, which make 40% of all incidents. Some 50 violent incidents involved weapons of some sort.

In addition, more than 100 synagogues were attacked, 59 community structures, including schools, were defaced, 89 cemeteries and monuments desecrated and 163 private properties vandalized.

The report noted an increase in harassment and violence in public places, especially near synagogues and Jewish schools. The report cites the example of the incident in Berlin where four men insulted a rabbi and threatened his daughter in a city street.

“The increase is clear. As a Jewish leader, I feel the danger to the communities, to people who walk the streets, to synagogues and to Jewish schools,” Kantor said.

“It is important to do something not only on the national level but on the inter-European level, in the European Union nstitutions,” he said.