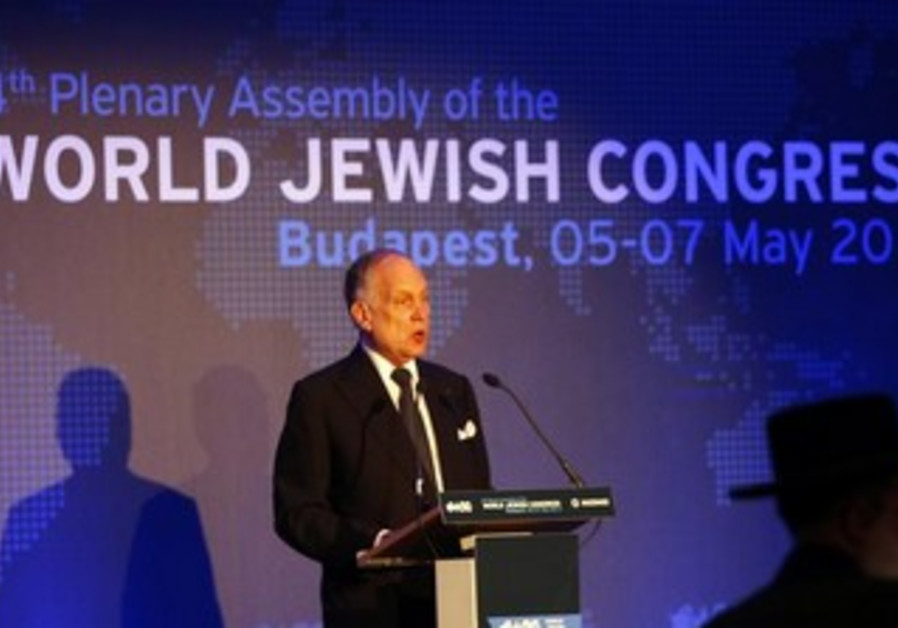 Ronald S.Lauder has been re-elected as President of the World Jewish Congress (WJC) at the Plenary Assembly of the organization in Budapest.

He will serve for another four-year term.

In addition to Lauder, the Assembly, comprised of delegates from over 70 Jewish communities from around the world, also elected Chella Safra from Brazil to serve as WJC Treasurer, David de Rothschild from France as the organization’s Chairman of the Governing Board, Moshe Kantor, President of the European Jewish Congress, as Policy Council Chairman and Mervyn Smith from South Africa as Policy Council Co-Chair.

“I see this as the top assignment for the Jewish people and I am excited to serve as President of the World Jewish Congress for another four years,” said Lauder.

Lauder is WJC President since 2007.

The 69-year-old businessman has established philanthropic organizations such as the Ronald S. Lauder Foundation, an organization dedicated to rebuild Jewish communities in Central and Eastern Europe.

David de Rothschild, born Baron David René James de Rothschild, 70, is chairman of Rothschild Continuation Holdings, parent company for all Rothschild banking companies, which are global and currently serve as the world’s 31st oldest bank. David was born in New York City as a result of his parents escaping the Nazis during the German occupation of France in World War II. His family moved back to France following the liberation where David ultimately took over the family banking business that was able to flourish after Socialists lost power in France.

In 1974, David married the Italian Princess Olimpia Anna Aldobrandini and they currently have four children and live in Normandy.

Chella Safra, 62, was born in Beirut and currently resides in Sao Paolo, Brazil. She has been a leader of the Jewish community in Brazil for the past 40 years and has been involved in Karen Hayesod, the Safra Foundation and many other Jewish and non-Jewish philanthropic organizations.

Safra is a member of the Executive Board and the Consulting Board of Karen Hayesod of Sao Paolo. She also founded the Women’s Division for the foundation in 1986 and has served as its Honorary President since then. Safra was the representative of Brazil at the Jewish Agency in Israel for Karen Ha’yesod and also Editor-in-Chief of Kol News, a Jewish magazine in Brazil.

She was also the President of the Women’s Committee for Social Welfare at the Beit Yaacov Congregation in Sao Paolo.

She is married to Moise Safra and have five children and 12 grandchildren. Together they support art museums in Israel and Brazil, in addition to a plethora of other Jewish and non-Jewish philanthropic initiatives.

Robert Singer was presented as new CEO and Executive Vice President of the WJC. Singer, who currently resides in London, spent 11 years in the Israel Defense Forces, 12 years in Israel’s Prime Minister’s Office and 14 years at World ORT.