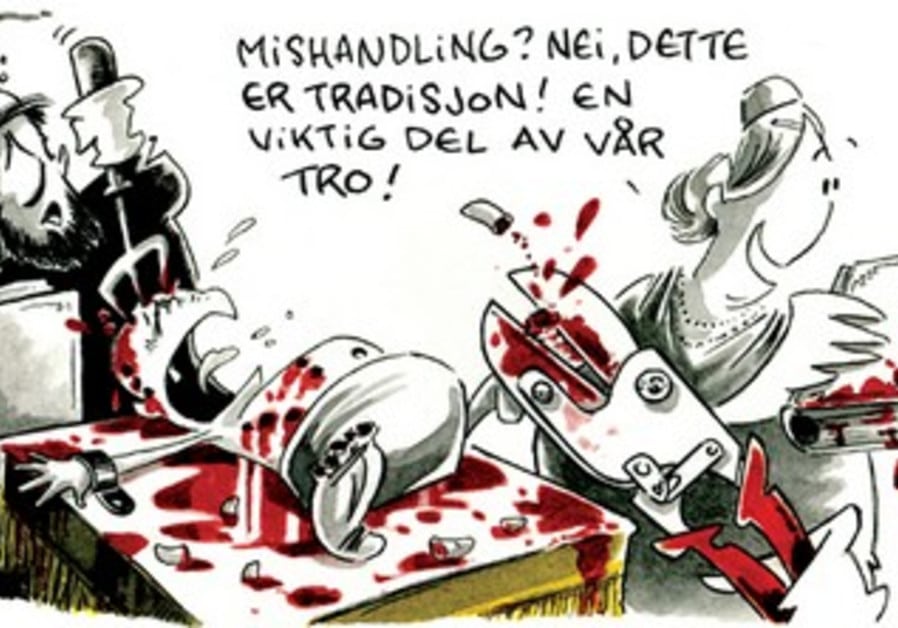 The caricature that appeared in Norway’s third largest daily, depicts what some construed to be Jews torturing a baby during a circumcision.

It showed police officers looking on as a bearded man wearing a black hat and black coat sticks a three-tooth pitchfork into the head of a blood-soaked baby while holding a book.

Another unseen person cuts off the baby’s foot with a bolt cutter as a woman in a long-sleeve shirt and a hat shows the officers another blood-spattered book and tells them: “Abuse? No, this tradition is central to our belief.” The police officers apologize “for interrupting.”

In a statement sent to the press, Abraham H. Foxman, ADL National Director, wrote that the cartoon was an “appalling distortion of a core Jewish ritual.”

The lobby organization called on the editors of Dagbladet to issue an official apology and for other government and societal leaders in Norway to speak out against the cartoon.

Condemnation for the caricature also came from the Simon Wiesenthal Center’s associate dean, Rabbi Abraham Cooper, who said the cartoon was “so virulently anti-Semitic it would make Hitler and Himmler weep tears of joy.”

Manfred Gerstenfeld, a scholar of anti-Semitism and former chairman of the Jerusalem Center for Public Affairs, said the caricature “cannot be viewed separately from centuries of libels in Christian circles that try to establish a link between the ritual abuse of blood and the Jewish faith.”

But in an email sent to MIFF, a Norwegian pro-Israel organization, Dagbladet cartoon artist Tomas Drefvelin said he did not mean to draw Jews in his caricature, which he meant “not as criticism of either a specific religion or a nation [but] as a general criticism of religions,” Drefvelin wrote.

He added: “I gave the people in the picture hats, and the man beard, because this gives them a more religious character … Jew-hatred is reprehensible. I would never draw to create hatred of a people, or against individuals.”

Ervin Kohn, the president of Norway’s Jewish community, told JTA that in Norway, “it is not uncommon to compare brit milah with cutting off limbs and calling it mutilation. This is a form of lying, propaganda.”

The European Jewish Congress said in a statement Wednesday afternoon that it is considering taking legal action over the cartoon.

“This cartoon has crossed all lines of decency and is dripping with hate and anti-Semitism,” Dr. Moshe Kantor, president of the European Jewish Congress, said. “We are now studying the possibility that this legally constitutes incitement and even a hate-crime and will therefore require legal action.”

“This is a violent cartoon which is meant to inspire hate and contempt against one particular people. This type of hate, reminiscent of Nazi propaganda, cannot be left unanswered, and it is exactly this type of incitement which is contributing to a very troubling period for minorities in Europe at this time, especially with the rise of the far-Right,” Kantor said.