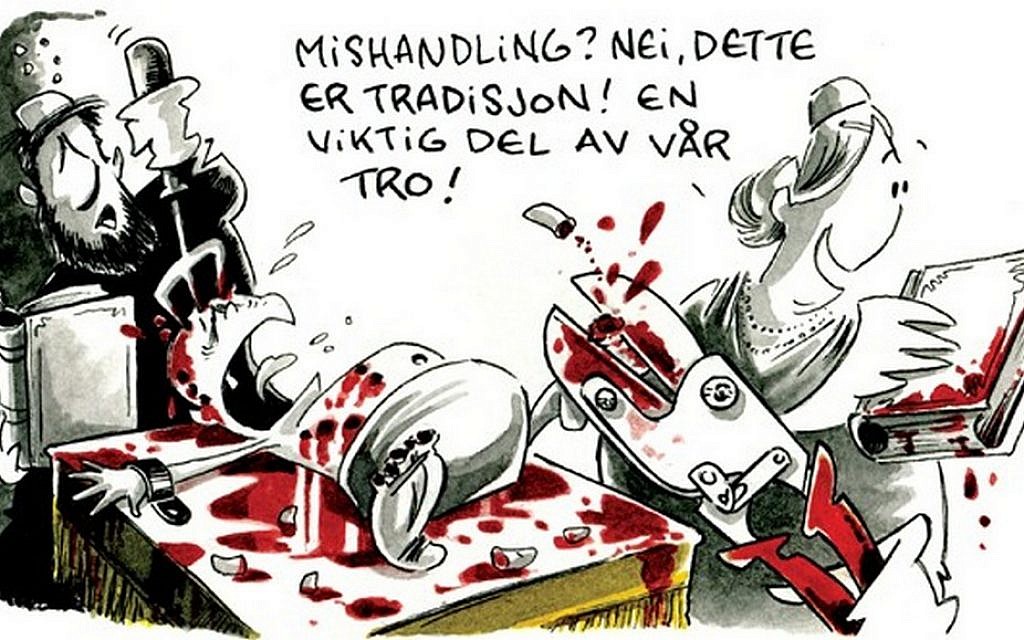 The Anti-Defamation League slammed the Norwegian newspaper Dagladet On Thursday, May 30, in regards to a cartoon featured in the popular daily that depicted Jews inflicting pain on a baby during the circumcision ritual.

More specifically, the caricature showed a rabbi like figure sticking a three-tooth pitchfork into the head of a bloody baby, all while leisurely reading a book.

Meanwhile, the baby’s mother stands beside him holding a blood-drenched wrench. She confronts the two police officers at the scene: “Abuse? No, it’s tradition, an important part of our beliefs.” To which the officers respond, “Beliefs? Oh, that’s alright.”

ADL National Director Abraham H. Foxman sent a statement to the press, in which he referred to the comic strip as “an appalling distortion of a core Jewish ritual.”

Another critic of the cartoon is Simon Wiesenthal Center’s associate dean, Rabbi Abraham Copper, who refereed to is as “so virulently anti-Semitic it would make Hitler and Himmler weep tears of joy.”

According to the Jerusalem Post, Manfred Gerstenfeld, a scholar of anti-Semitism and former chairman of the Jerusalem Center for Public Affairs, said the caricature “cannot be viewed separately from centuries of libels in Christian circles that try to establish a link between the ritual abuse of blood and the Jewish faith.”

Meanwhile, the man behind the controversy, cartoon artist Tomas Drefvelin, sent an email to MIFF, a Norwegian pro-Israel organization, claiming the nature of the comic’s message was lost in translation.

“It was not as criticism of either a specific religion or a nation,” Drefvelin wrote, “but as a general criticism of religions.”

He added: “I gave the people in the picture hats, and the man beard, because this gives them a more religious character … Jew-hatred is reprehensible. I would never draw to create hatred of a people, or against individuals.”

The Jerusalem Post reports that Ervin Kohn, the president of Norway’s Jewish community, told JTA that in Norway, “it is not uncommon to compare brit milah with cutting off limbs and calling it mutilation. This is a form of lying, propaganda.”

Shortly after, The European Jewish Congress reverberated Kohn’s statement as it announced it is considering taking legal action over the matter.

“This cartoon has crossed all lines of decency and is dripping with hate and anti-Semitism,” Dr. Moshe Kantor, president of the European Jewish Congress, said. “We are now studying the possibility that this legally constitutes incitement and even a hate-crime and will therefore require legal action.”

“This is a violent cartoon which is meant to inspire hate and contempt against one particular people. This type of hate, reminiscent of Nazi propaganda, cannot be left unanswered, and it is exactly this type of incitement which is contributing to a very troubling period for minorities in Europe at this time, especially with the rise of the far-Right,” Kantor added.

ADL has asked the editors of Dagbaldet to issue a formal apology, as well as for other Norwegian federal and human rights organizations to speak out against the cartoon.