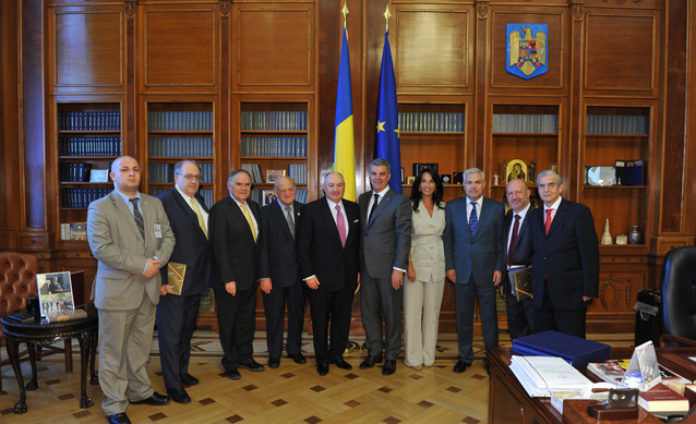 The EJC delegation spoke to the Romanian leaders about many issues, including the need for Hezbollah to be added to the European Union’s terror list and its activities proscribed.

“At the moment there are great upheavals in the Middle East, but Europe should not stand by and leave the way open for extremist elements to import their conflicts into Europe,” Kantor said to the Romanian leaders. “One of the current chief elements of violent discord in the Middle East is Hezbollah and it is incomprehensible that this organization with a proven and unquestionable record of murder and terrorism in Europe and around the world, is allowed to act freely, recruit, plan terrorist operations and raise funds uninterrupted on the European continent.”

“In the face of the bloodshed and violence taking place in the Arab world, Europe can send a very strong message by immediately proscribing an organization actively involved in murder and hatred.”

The delegation also discussed the EU initiative to promote the labeling of Israeli goods originating from the West Bank. “This policy could be seen as discriminatory as the European Union appears to be singling out one disputed territory of the world for special treatment, whereas the European Union has no similar policies for the other tens of territories that are the subject of international disputes.”

“The implementation of a one-sided and biased policy against Israeli companies whose presence is in clear accordance with signed agreements witnessed by the EU, will only serve to negatively affect this positive momentum and increase ill-faith between the parties.”

The EJC and the Romanian leaders also discussed the threat to Jewish communities in Europe from growing anti-Semitism.

“There is a dangerous steadily rise in anti-Semitism, Intolerance and racism in Europe, and there still remains the lack of an effective tool to fight these threats to our continent.” Kantor said to the Romanian leaders. “We need to provide a tool to the educators to educate against discrimination, the police to better enforce against hate and the legal systems to effectively punish and send a clear message that there can be no tolerance for the intolerant.”

The EJC delegation presented the Romanian leaders with a model law on tolerance, an initiative for dealing with these threats, comprised by European experts and legislators which will provide legal tools to combat racism and xenophobia on a pan-European basis.

“We hope Romania will become one of the first nations to adopt and lead a model law on tolerance that we have written.”