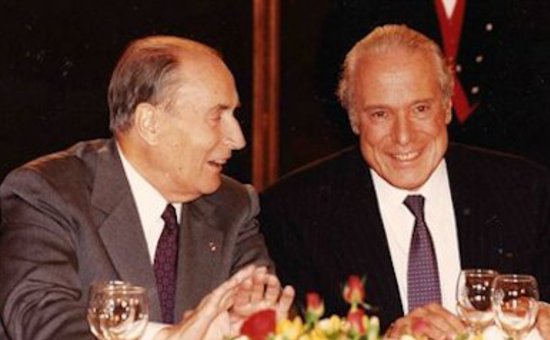 Jean Kahn, a former leading personality of the Jewish community in France and human rights activist, died Sunday at the age of 84, in his native town of Strasbourg, after a long illness.

Born on 17 May 1929, Kahn graduated in law from the University of Strasbourg. He was admitted to the bar in 1953 before joining the family textile business.

In 1969, he became director of the Jewish Community of Strasbourg, over which he presided from 1972, as well as the regional CRIF chapter Bas-Rhin.

From 1995 to 2008, he also lead the Central Consistory of France. Alongside his religious commitment, Jean Kahn fought all his life for human rights, against intolerance and racism, said a biography issued by his family.

He was active in the efforts to transfer the Carmelite convent from Auschwitz, in the protests against the desecration of Jewish graves in the Carpentras cemetery, and in the struggle against France’s National Front Party, including a crucial intervention in having the parliamentary immunity of its leader, Jean-Marie le Pen, lifted so he could face charges before the European Parliament.

In 1990 and 1991 he went to Kosovo to try to help find a peaceful solution to the conflict in the former Yugoslavia.

Throughout the 1990s, he organized numerous seminars for democracy and against racism, especially in the former Soviet Union, and also trips to Auschwitz for European politicians and students.

French President François Hollande said on Sunday with Kahn “a great attorney, an indefatigable defender of human rights and a great figure of French Judaism” had disappeared.

“Jean Kahn never tired in his battle for human rights, particularly the rights of Jews, in the face of hate and intolerance,” EJC President Moshe Kantor said. “His actions are a great example to me especially at this time in the face of the new wave of anti-Semitism.”

“The words ‘grand homme’ were never applied so justly as they were to Jean, a man whose total commitment to fighting intolerance was matched by his unparalleled leadership of French and European Jewry over so many decades.”