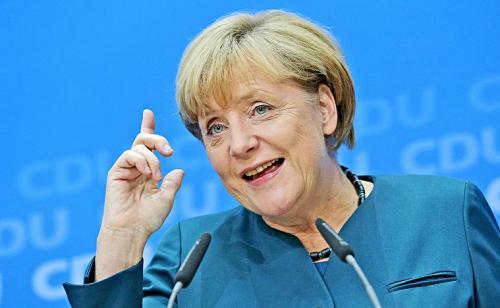 Angela Merkel’s historic third election victory was warmly greeted by European Jewish leaders this week – and the Board of Deputies is to mark her support of Germany’s Jewish community.

Board leaders hope she will accept a special award in person, having issued an invitation for her to become the first German chancellor to visit them.

Rabbi Pinchas Goldschmidt, president of the Conference of European Rabbis, hailed her success at the polls on Sunday as a “good thing for Germany, for Europe and for Israel and the Jewish people. Among the heads of state of Europe, she is the best one.”

The Board hopes to present her with the award at its annual dinner in November, where Britain’s most senior female politician, Home Secretary Teresa May, has been confirmed as the guest speaker.

But it does not know whether Mrs Merkel will be in a position to accept the invitation until she has concluded negotiations to form her governing coalition.

Board treasurer Laurence Brass said that the idea of the honour had come from the European Jewish Congress (of which the Board is a constituent). “They feel she has made a major contribution to the wellbeing of German Jewry.”

Moshe Kantor, president of the European Jewish Congress, said: “As European Jews, we have a long-standing close relationship with Chancellor Merkel.”

The congress had been “very pleased”, he added, with the role of Chancellor Merkel and her government “over the recent threat to circumcision in Germany. Additionally, I would like to express our appreciation for the chancellor’s comments before the elections about the importance of Israel’s security.”

Germany approved a law to protect religious circumcision last year after a court suggested it could lead to criminal investigation.

Mrs Merkel last month became the first German chancellor to enter the memorial on the site of the Dachau concentration camp outside Munich.

In spring, she was awarded the Lord Jakobovits Prize for European Jewry by the CER, also in recognition of her support for German Jewry and her opposition to antisemitism.

If she were to attend the Board dinner, she would be the first chancellor to do so.