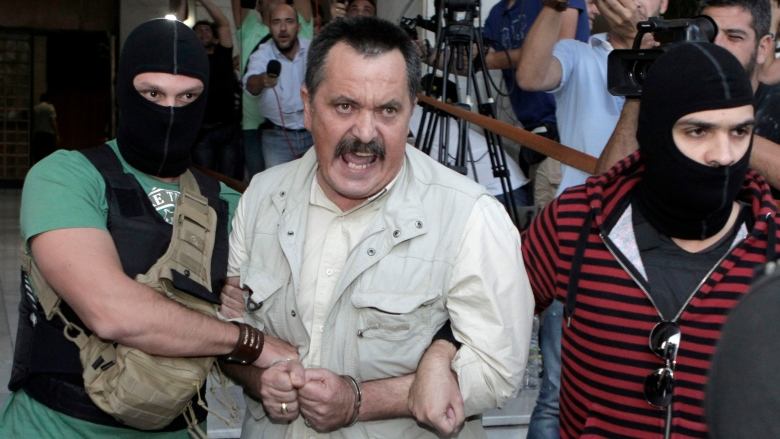 A Greek lawmaker sought by police surrendered on Sunday, bringing to six the number of legislators from the extreme-right Golden Dawn party now in custody and accused of being members of a criminal organization with intent to commit crimes.

The government crackdown on the fiercely anti-immigrant party marks the first time since 1974 that sitting members of a Greek Parliament have been arrested. The arrests underline the government’s efforts to stifle Golden Dawn, which has been increasingly on the defensive since the Sept. 17 fatal stabbing of a Greek man blamed on a Golden Dawn supporter.

Thirteen Golden Dawn members and two police officers also have been taken into custody, and arrest warrants issued for 11 other suspects who remain at large, officials said.

As he turned himself in at police headquarters in Athens on Sunday, Christos Pappas – a lawmaker described by prosecutors as the Golden Dawn’s No. 2 official – condemned the crackdown on his party and the painful austerity measures that have been imposed during the bailout of Greece’s battered economy.

Several Greek TV channels broadcast his arrival live, showing him leaving a taxi, ducking under the cordon surrounding the building, and turning to the cameras.

“I present myself voluntarily. I have nothing to hide, nothing to fear. The occupation government of the bailout deals has begun unprecedented political persecutions, using so-called independent justice. Nationalism will prevail. Golden Dawn will survive,” he said.

Pappas then shouted, “Hail Golden Dawn!” and waved as he entered the building.

Five other legislators from the party, which has neo-Nazi roots, have been in custody there since Saturday, including Golden Dawn leader Nikos Michaloliakos. They were charged with membership in a criminal organization with intent to commit crimes, as Pappas will be.

Court hearings before a magistrate are scheduled on Tuesday and Wednesday.

Given the seriousness of the charge they face, the arrested Golden Dawn suspects are expected to be transferred to a prison as they await trial. However, the jailed lawmakers will remain members of parliament and only lose their seats if they are convicted or resign.

The government said it plans to introduce legislation Monday aimed at cutting all state funding to Golden Dawn, which is slated to receive more than €873,000 ($1.18 million) in 2013.

On Sunday, the Brussels-based European Jewish Congress welcomed the crackdown on Golden Dawn, calling it “a long overdue move which will hopefully send a very strong message to neo-Nazis in Greece and across Europe.”

In a statement, congress President Moshe Kantor, said: “We congratulate Prime Minister Antonis Samaras on the crackdown … and hope that the Greek leadership will make this a central part of the European Union presidency, which they will assume in January 2014.”

A formerly marginal organization, Golden Dawn won only 0.29 per cent of the vote in a 2009 national election in Greece, but saw its popularity explode by capitalizing on public resentment over an influx of illegal immigrants.

Downplaying its extremist roots and presenting itself as a “patriotic” force, the party won public support by patrolling streets, doing the shopping for elderly residents, and collecting back rents for apartment owners with migrant tenants.