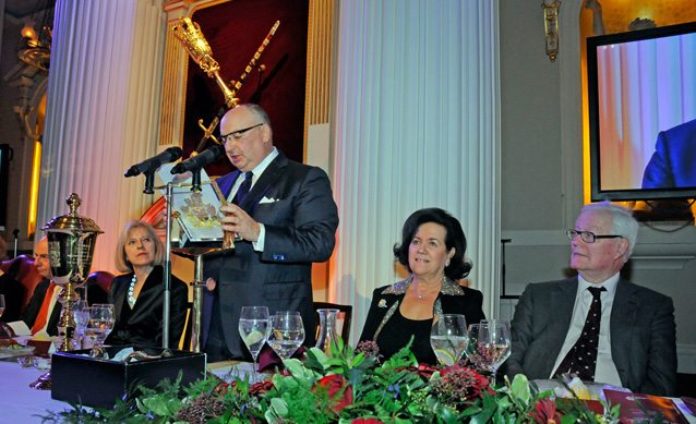 The event took place at the Egyptian Hall of the Mansion House in the City of London. The 350 guests enjoyed a speech from the Israeli Ambassador to the court of St. James His Excellency Daniel Taub, as well as responses from officers of the Board.

In his speech, Kantor paid tribute to the Board the Board of Deputies which he said had “taught the world the importance and vitality of a collective and representative Jewish voice over 250 years ago as a body respected across the political, cultural and social spectrum”.

“The Jews of Europe need your experience, we value your skills and we thank you for your continuing and remarkable contribution,” he told the gathering.

He also stressed the important of tolerance and civic values within society, saying that all citizens, of whatever religion or ethnic background, “have rights and responsibilities as active and contributing members of society”.

The event also brought together many honoured guests including UK Home Secretary Theresa May, the Lord Mayor of London Fiona Woolf and the former Home Secretary Lord Hurd.

May assured the community that the coalition government would not tolerate anti-Semitism in any form and “would zealously protect the right of Jewish people to follow their religious practices and customs”.

May, the first Home Secretary to speak at a President’s Dinner, pledged that her government would protect Shechita against those who “would like to see it banned in Britain today. I can assure you they will not succeed.”

The Lord Mayor praised the Board’s primary role in interfaith said “as representatives of the Jewish community I thank you all for what you do. And I give thanks for London’s rich mix of faiths, cultures, creeds and colours.”

The Dinner was hosted by the Board’s President Vivian Wineman, the current chairman of the EJC Council and chaired by Flo Kaufmann, a former holder of the same post.