Address By Irina Antonova, President Of The State Pushkin Museum Of Fine Arts, At The Opening Of The Exhibition “My Homeland Is Within My Soul” Of The Museum Of Avant-Garde Mastery (Magma) 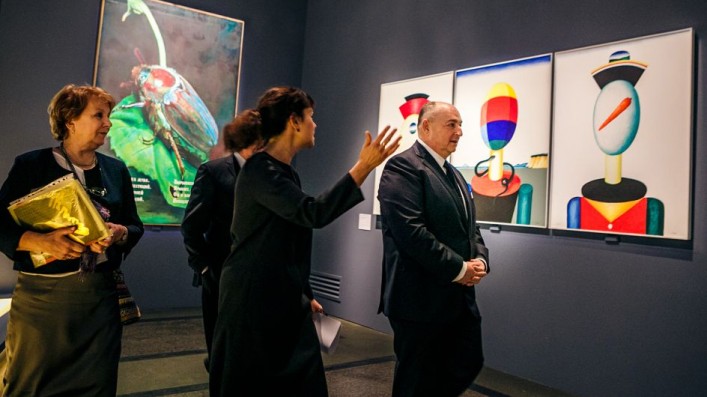 Good evening! I am very pleased that so many art lovers have come to the opening of this exhibition.

I believe this exhibition is absolutely extraordinary. It is a celebration! Its aims, content and quality are of the highest, and it is truly wonderful. In terms of 20th century art, I would say that it is as important for our museum and, perhaps, for Moscow’s art history, as “Moscow-Paris,” which we were also happy to host. While “Moscow-Paris” covered just the first third of the 20th century, this exhibition encompasses a longer stretch of time. But its accents and the organiser’s message make it equally meaningful for understanding the art of that century, so complicated, dramatic and often tragic in terms of art evolution.

It is not easy to be a painter today – standing at a cross-road, revising values, looking for something new. This path can indeed lead to downfall and failure. Mr. Kantor has an inherent understanding of art and amazing intuition, in addition to exquisite taste.

This exhibition displays nearly one hundred works of art, which form a clear, distinct and expressive line of evolution. Are all of the milestones of the 20th century here? No, some of them are yet to be embraced. But I see painters whom I will never meet, not even at our biennale organised to compare the past and the present. In a word, this exhibition has balance when you look at 20th century art, which I haven’t met before at any of the ambitious 20th century art shows I have visited. Perhaps some of you have.

This balance is vital for me. I shivered when I saw Zhilinsky. You never see his works, even at the most contemporary of exhibitions. And it isn’t only Zhilinsky; Lucian Freud and early Rothko (unlike later Rothko) are hard to find, as well.

Their works are here, which means that the collector believes they are important and form a certain link, perhaps one of the major links in the chain of evolution of 20th century art revealing the problem of model, life and art. We don’t see works with a naturalistic bias that would be insulting for the viewer. This collection does not have them. What it has is works of art closely related to nature, but at the same time this is an absolutely new art, the art of the 20th century.

I am amazed at Mr. Kantor’s vision and ability to find balance. I would like to repeat that his collection, with the addition of several links, would make an ideal museum of 20th century art. It has works of fantastic quality. But my personal favourite is the painting that opens this show – Repin’s A Parisian Café. It belongs to the 1870s, but goes so well with the general concept and is essential. Let alone the glorious Serov, which I had a chance to see before the founding of the museum, and many other magnificent works, including the works by Chagall.

There are paintings by some artists that the collector pays special attention to; Soutine, for instance. Many of his works are represented here, creating a complete picture of the contribution made by this 20th-century artist. I think that Tyshler is represented in an extremely interesting manner. We were on good terms with Alexander Tyshler, and after his death Flora Syrkina, his widow, gave us 150 of his paintings – gorgeous works, some of which were created in the 1920s. But the selection I have seen here (including Director of Weather) encompasses the absolutely unique, the best and the simply brilliant works that illuminate the place and meaning of Alexander Tyshler’s art in the 20th century.

I think the design of this exhibition is outstanding. It was created by our dear French colleague, Nathalie Crinière, who has worked with us on numerous projects here in the Museum, including exhibitions of Le Corbusier and Dior. I think she has found a rhythm, interval, colour and lighting that elevate this exhibition.

Today some journalists asked me if collecting is a disease. No, it is a passion! It is a beautiful passion! But it is, of course, an obsession. It is not a disease. It is an obsession. And to be able to collect you must be obsessed with this passion. But you also need something else. You have to be able to feel and hear your time. Sergei Shchukin and Ivan Morozov heard their time. Tretyakov also heard his time, a little bit earlier. The great collectors heard their time and were able to respond to its messages. Sometimes they did it before society could understand. And in these halls we have see the works of artists whom we probably do not appreciate enough yet. We do not understand them completely, but they talk about us about our time. The future belongs to them just as much as it does to the more widely recognised artists represented in this hall.

I wish you success in your collecting. It is very important for us all, since art is the state of our soul. Our soul and understanding of beauty and of own world are the most important things that any of us possess. Mr. Kantor, I hope you will meet many wonderful things on this path, a path you have chosen voluntarily!