In Meeting With Greek Pm Samaras, EJC Executive Expresses Support For Greece’s Action Against The Neo-Nazis 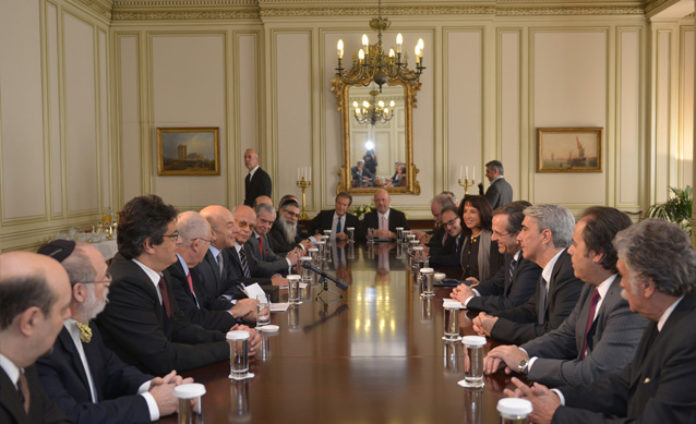 The European Jewish Congress (EJC) Executive body expressed support for the actions undertaken by the Greek Government against the neo-Nazi party, the Golden Dawn, during a meeting in Athens with Greek Prime Minister Antonis Samaras.

During the meeting, Samaras was presented with an award “in recognition of his courageous leadership in protecting tolerance and human rights”.

“We commend Prime Minister Samaras on his leadership, especially his brave and courageous stand against the Golden Dawn party who want to use and abuse democracy for their hateful and racist agenda,” said Moshe Kantor, President of the EJC, about the award.

“We ask that this experience and leadership be used as an example and a model for the rest of Europe when Greece assumes the rotating EU Presidency in January,” he added.

During the meeting with the Greek leader, the EJC Executive also discussed the May 2014 European Parliament elections and called on him and other European leaders to ensure that voter apathy and a lack of mainstream political mobilization does not ensure that the far-right makes significant electoral gains.

“Polls show that a third to a quarter of the next European Parliament could be made up of populist, far-right nationalist and neo-Nazi parties which would stymie moves against hate speech and push legislation limiting religious practices,” Kantor said. “This could result in a far less governable European Parliament and put the unity and morality of the Union at risk.”

Referring to the recent EU Fundamental Rights Agency survey which shows a major rise of anti-Semitism in Europe, Kantor said it should serve as a wake-up call for European tolerance,” Kantor said.

“The fact that more than one fifth of European Jewry is too scared to identify as Jewish or go near a Jewish institution should serve as a frightening warning that our democracies are under attack.”

“While the survey was about Jews, the results are probably negative for other ethnic, religious or national minority, and it demonstrates that parts in Europe is being driven by the extremes.”

The Executive also discussed the recent interim agreement between the P5+1 world powers and Iran on the Iranian nuclear program. It was briefed on the agreement and its implications by Maj. Gen. (res.) Yaakov Amidror, former head of the Israeli National Security Council.