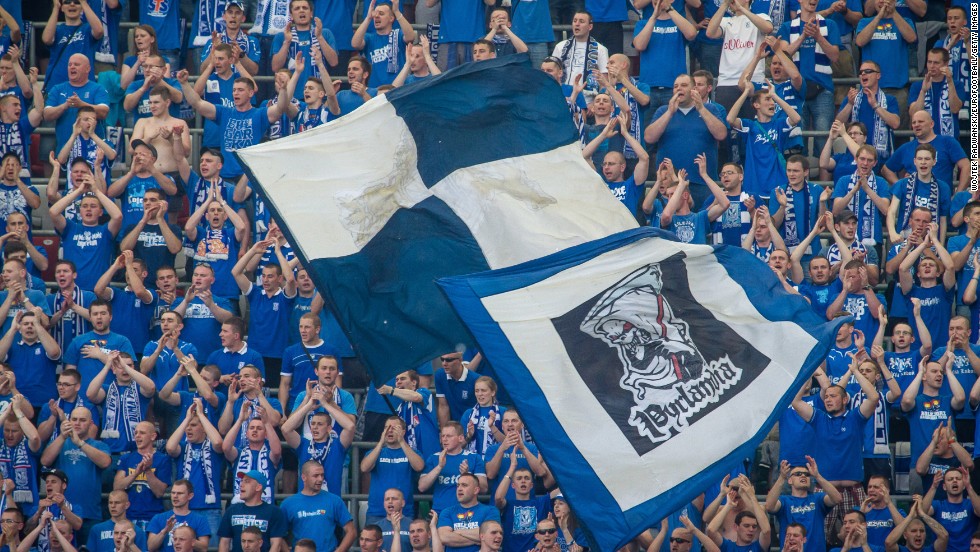 “Move on, Jews! Your home is at Auschwitz! Send you to the gas (chamber)!”

Apparently yes, according to a Polish municipal prosecutor in Poznan, who decided this week that chants by football fans are not criminal offenses.

The incident, which happened during a Polish league game between Lech Poznan and Widzew Lodz on September 29, 2013, has sparked debate over the country’s attitude towards anti-Semitism.

“This case is being discussed a lot in Poland and rightly causing critique of the system and its decision,” Polish football writer Michal Zachodny told CNN.

“Although the PZPN, the Polish Football Association, has introduced stricter laws and are more proactive in dealing with such problems than they were, there is no plan, no willingness to do anything with the problem.

“There is no special police line to report abuse anonymously.”

PZPN did not respond to CNN’s request for comment.

Prosecutor Monika Rutkowsk decided not to take any action against the Poznan fans on the grounds that their chants were directed at the opposing team and not specifically at Jews.

The team, Lech Poznan, said in a statement to CNN, “The club has already expressed its condemnation of this type of behavior and has fulfilled its obligations to the police and prosecutors.”

“The club does not deal in the prosecution of groups of fans, because this is the task of the aforementioned police and prosecutors.

“One of the aims of the club is to educate its fans, to talk with them and eradicate certain issues. This approach has been in place at the club for many years.”

Anti-Semitism within Polish football is not a new phenomenon. In a country where some of the worst atrocities of the Holocaust were committed, the home of Auschwitz, this latest episode will be difficult for many outside of Poland to comprehend.

Widzew has often been often targeted because of its links to the Jewish community which was exterminated by the Nazis during the Holocaust.

Known as a “Jewish club” in the same way as English team Tottenham Hotspur and Dutch side Ajax are, Widzew and the city’s smaller club, LKS Lodz, are often taunted by rival team’s fans.

Poland was home to the largest Jewish community in Europe before the Holocaust, when 90% of the country’s 3.3 million Jews were killed by the Nazis. Today there are an estimated 25,000.

Moshe Kantor, the President of the European Jewish Congress, says the decision has consolidated a view that anti-Semitism is the “last acceptable prejudice in football.”

“Unfortunately, extreme anti-Semitic chants like those in Poznan are regularly heard in many European stadiums, including in England and Holland, and the reaction of the authorities is minimal,” Kantor said in a statement on the organization’s website.

The problems within Polish football are not confined to Poznan and Lodz — Krakow and Warsaw witness similar incidents whenever those cities’ clubs play each other.

Cracovia, a club founded by Jews in 1906, endures a hateful relationship with its Krakow city rival Wisla, which is driven by anti-Semitism.

Wisla’s hardcore supporters, known as the “Anti Jude Gang,” are infamous for their chanting and banners, even though the club has signed Jewish players in the past.

“It is naive to think that there isn’t still an anti-Semitism problem in Poland, however the most worrying thing is that in some cases it clearly isn’t seen as a problem at all,” Ryan Hubbard of Ekstraklasa Magazine told CNN.

“The irony in some of these chants is that the perpetrators sometimes have Jewish players within their teams.

“Maor Melikson, an Israeli international, and his fellow countryman David “Dudu” Biton, played a massive part in Wisla Krakow’s title success in 2010-11 — Melikson even scoring the winner against rivals Cracovia, which won the title.

“But even since then, it isn’t uncommon to hear these chants used in a derogatory way.”

The frustration for many is that the authorities, including the PZPN, do not seem to be tackling the problem head on.

There are a number of stories of anti-Semitic banners being paraded in stadiums and similarly offensive t-shirts being sold outside venues.

The tale of how Resovia fans displayed a banner at the home game against local rival Stal depicting a Jewish man in an Auschwitz uniform with a “no entry” sign across his face and the slogan, “Death to those with curved noses,” is just one that has come to prominence.

In September 2011, when Israeli side Hapoel Tel Aviv played at Legia Warsaw, its players and fans were abused throughout the contest.

Legia’s supporters, who are renowned for being racist, unveiled a large “Jihad” banner behind the goal while holding up placards.

Two weeks later, the same fans chanted “Hamas, Hamas, Jews off to the gas,” at Lodz fans instead of the traditional chant of, “Your home is Auschwitz, all Poland knows that the entire Jewish army is going to the gas chamber.”

“I wouldn’t say that all Polish fans are anti-Semitic or that this is a common situation because it’s not,” added Zachodny.

“The problem is real, though, and comes from the fact that most of the ultras groups and hooligans are connecting themselves to far-right movements which they take and explain as patriotic.

“Unfortunately, many of them despite not being anti-Semitic, use the chants often, also claiming it is because it was always like that, it should not be understood as racism or anti-Semitism or anything like that.

“That is dangerous as well, obviously, while PZPN is not doing anything about it — rarely even commenting it.”

The incident in Poland came just weeks after French footballer Nicolas Anelka courted controversy by making the “quenelle” gesture after scoring for West Bromwich Albion in the English Premier League.

The “quenelle” involves pointing the right arm down at an angle and touching that arm with the left hand.

Anelka has said that the celebration was nothing more than a nod to his friend, controversial French comedian Dieudonne M’Bala M’Bala, who has popularized the gesture in France.

But others believe the gesture is a Nazi salute in reverse, and it has been linked to rising anti-Semitism in France – a charge over which Dieudonne, a holocaust denier, faces an investigation by the Paris prosecutor’s office.

The English Football Association has yet to make a decision on whether the player will face sanctions.

But Kantor believes that the incident in Poland, coupled with Anelka’s gesture, has brought about a new wave of anti-Semitism within football.

“We have seen quick condemnation, bans and major fines when other minorities are attacked by players and fans in Europe, but barely a whimper is heard when Jews are subject to attack,” he said in the statement.

“It has been over two weeks since Anelka’s offensive salute and it is completely clear to all that the gesture was designed to offend Jews by an unrepentant anti-Semite and Holocaust-denier.

“The silence on behalf of the football authorities compounds the original offense by Anelka, and if it is not harshly dealt with it will be seen as implicit acceptance of this anti-Semitic affront.”