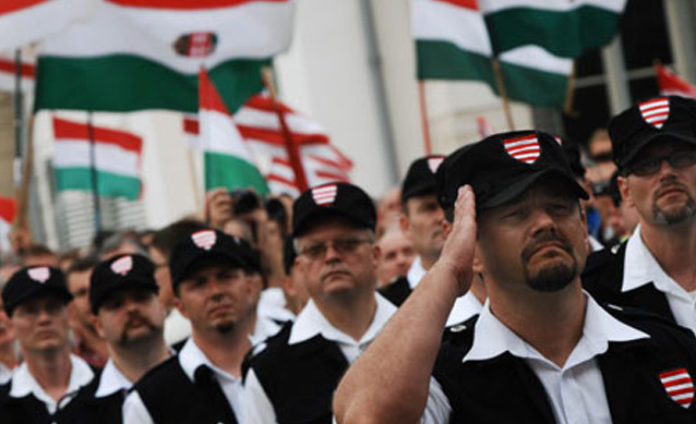 Efforts are underway to prevent Hungarian extreme-right and anti-Semitic party Jobbikto hold next week a political assembly in a building that used to be a synagogue in the city of Esztergom.

The entire Jewish community in this city located 46 km (29 miles) north of Budapest, was killed during the Holocaust. The synagogue today is operated by the local government as a cultural center.

The rally is part of Jobbik’s campaign ahead of elections in April. The party’s platform is laced with anti-Semitism and anti-Roma policy.

Jobbik is the third largest party in Hungary with 43 of the 386 seats in the Parliament.

In 2012, a Jobbik MP, Marton Gyongyosi, had urged the Hungarian government to make a list of citizens with Jewish ancestry who might post a security risk to the country.

Last week, the chairman of the the opposition Hungarian Socialist Party in Esztergom, Tamas Gal, sent an open letter to thecity’s mayor urging her to bar the rally from the synagogue.

“The choice of location for this event is an unworthy, ugly, and cynical desecration of the memory of the victims of the Holocaust and the sentiments of the survivors,” he wrote.

The Federation of Hungarian Jewish Communities (Mazsihisz) is considering sending people to physically prevent Jobbik party from holding its rally in the synagogue.

Earlier this week, the Rabbinical Council of Europe (RCE) announced its plans to hold its General Assembly in Budapest in March in cooperation with the Hungarian government.

The March convention will also feature a memorial ceremony in line with the Hungarian government’s own memorial project to the landmark 70th anniversary of the Holocaust in Hungary where some 800,000 Jews were exterminated by Nazis.

The European Jewish Congress called on the Hungarian Government to prevent the Jobbik rally at the former synagogue.

“While the Nazis physically destroyed this community, its ideological descendants in Jobbik are destroying it once more with their intended rally,’’ it said.

The leader of Jobbik , Gabor Vona, was in London this week for a party rally despite calls to ban him from the UK and strong opposition from anti-racism activists.

About 100 supporters of the party gathered at Speakers’ Corner in Hyde Park to hear Vona speak.

The venue of the rally was changed after Jobbik supporters were confronted in central London by more than 100 members of Unite Against Fascism and other groups.

British Home Secretary (Interior Minister), Theresa May, resisted calls last week to ban Vona from entering the country to hold the rally which came on the eve of Holocaust Memorial Day in Britain.

One London Assembly member, Andrew Dismore, who wrote to the Minister demanding that the rally be banned, called Jobbik “the most powerful outwardly fascist political party in Europe”.