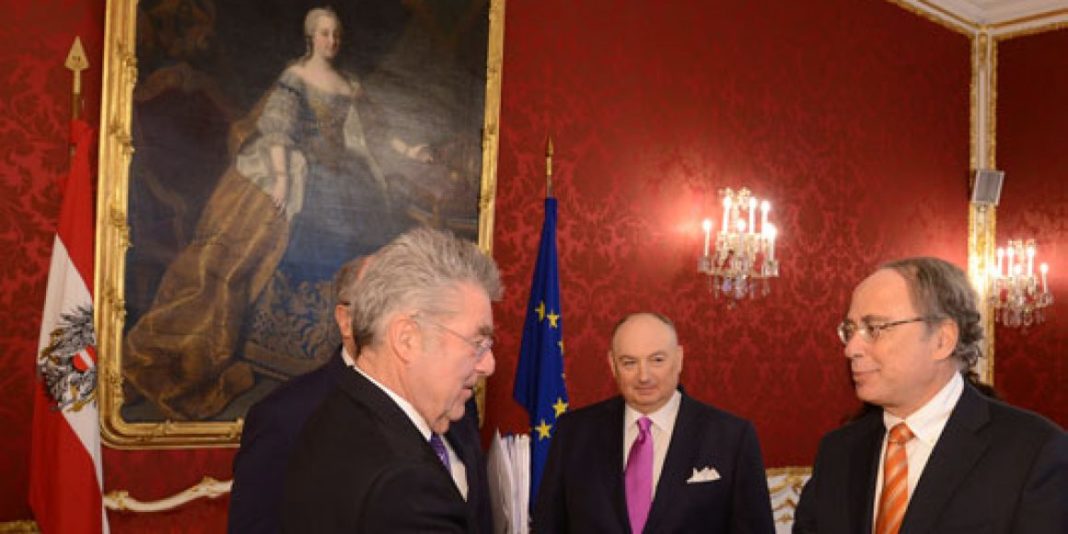 A European Jewish Congress delegation led by President Dr. Moshe Kantor met with Austrian President Heinz Fischer today where they discussed issues of pressing concern. Those include the negotiations between Iran and the P5+1 which took place in Vienna, the increasing rise of anti-Semitism and the predicted rise of extremist and neo-Nazi parties in the upcoming European Parliament elections.

“The Iranian nuclear threat is more serious today than ever, since the pressure on the Iranians has decreased and they are starting to recover from their financial crisis,” Kantor said to President Fischer, who met with Iranian Foreign Minister Mohammad Javad Zarif last week in Vienna. “Soon they will be able to reactivate all elements of their programme that were frozen during the talks. It is vital that the international community, represented by the P5+1, take all necessary steps in the final negotiations to keep the pressure up.”

“The Iranian nuclear program should be completely shut down, without means of reactivation, entailing the destruction of a massive amount of the existing enriched uranium, and the complete cessation of all tracks, including plutonium enrichment.”

“The wider region is watching these negotiations carefully and any perceived failures will have ramifications for other challenges in the region, including the civil war in Syria, sectarian violence in Lebanon, Iraq, Egypt, the possible domino-effect of more Middle East nations seeking to acquire nuclear weapons to offset the Iranians and the Israel-Palestinian negotiations.” Kantor added.

Kantor also spoke about the worrying rise of anti-Semitism and extremism across the continent, especially ahead of the European Parliament elections.

“Today we are witnessing a dangerous and violent trend, with the obvious strengthening of neo-Nazi parties in Greece, Hungary and other countries,” Kantor said. “Unfortunately, we also expect to see a sharp rise in the popularity of the ultra-right parties, notably in the European Parliamentary elections.”

“Anti-Semitism is also raising its head in different public domains, where it is being treated by some as a legitimate part of the freedom of expression as demonstrated by comedians, football players and authors. We must have zero tolerance for anti-Semitism, regardless of who the perpetrators are. We need to act now, and we need courageous political leaders to speak out and act against these phenomena.”

Kantor and the EJC delegation, while praising the Austrian Government’s legislation against hate, also spoke to the president about the rise of anti-Semitism in Austria.

“While Austria has some of the best legislation against incitement to hatred and neo-Nazism in Europe, anti-Semitic incidents have increased dramatically,” Kantor said. “We must be vigilant against all expressions of anti-Semitism, hate and xenophobia.”

Leaders of Europe’s Jewish communities, making up the EJC’s executive committee, are also to gather in the Austrian capital to discuss key issues of concern impacting upon Jewish life across the continent.