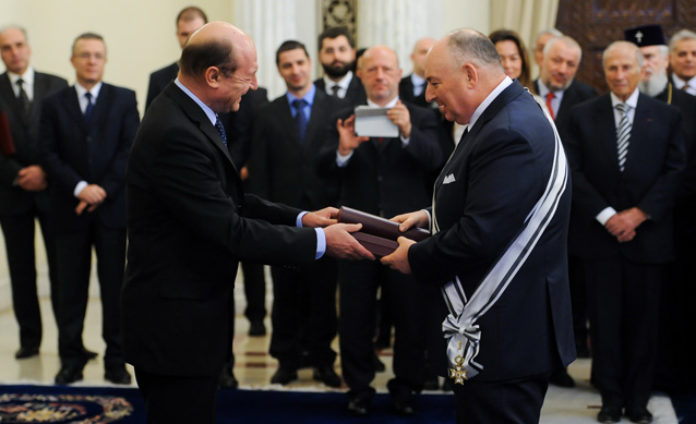 European Jewish Congress President, Moshe Kantor received the Grand Cross of the National Order “For Merit” Award from Romanian President Traian Basescu during a ceremony in the Presidential Palace in Bucharest.

The Award was presented as a ‘‘symbol of great appreciation for Moshe Kantor’s moral and professional contribution to tolerance, reconciliation and peace in Europe which he has demonstrated throughout his life, for his strong contribution in preserving Jewish heritage and dialogue between faiths and ethnic groups, as well as contributing to Romanian-Israeli relations.’’

“I am delighted to accept this award which highlights the need for greater tolerance and peace in Europe,” Kantor said. “European Tolerance is being tested these days, especially ahead of the European elections where extremist parties are gaining power and are predicted to receive around a quarter of all votes.”

He added, “We, the European political center, must motivate and rally for the European future, because some wish to take us back to Old Europe, the Europe of conflict, hatred and xenophobia and we must remain vigilant. Our answer must be at the ballot boxes and through the democratic processes.”

The ceremony was attended by government ministers, diplomats, the President of the Romanian Parliament, MPs and high level officials from the public and private sector.