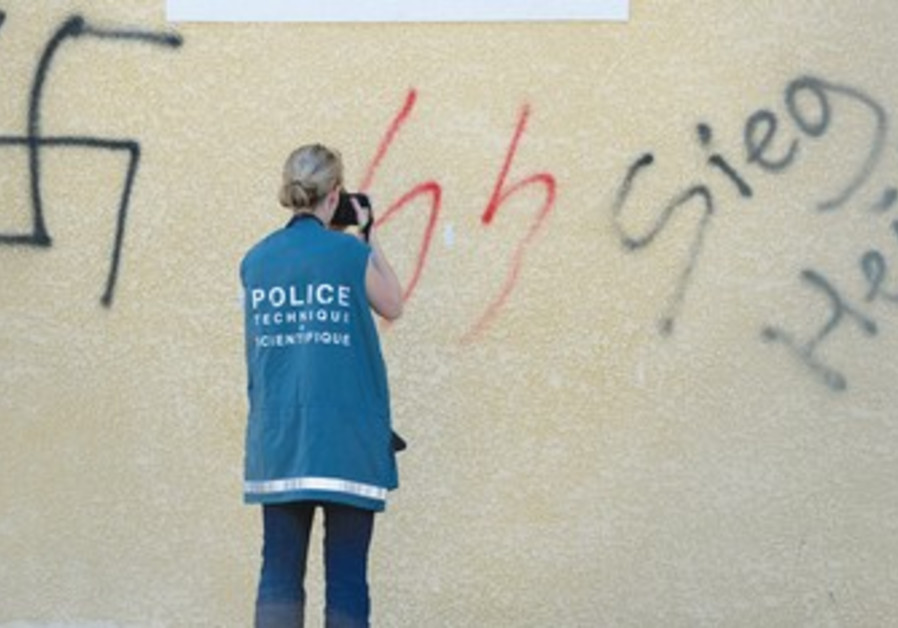 President Moshe Kantor presents results of study on worldwide anti-Semitism in 2013; over the past year 554 “registered violent anti-Semitic acts” were recorded.

“Normative Jewish life in Europe is unsustainable,” European Jewish Congress President Dr. Moshe Kantor said on Sunday. Presenting the results of a study on worldwide anti-Semitism in 2013 by the eponymous Kantor Center for the Study of Contemporary European Jewry at Tel Aviv University, Kantor cited increasing anti-Semitism and rising “fear and insecurity” as factors leading to a European Jewish decline.

Citing a November study by the European Union’s Agency for Fundamental Rights which showed that almost a third of Jews in several European countries are mulling emigration, Kantor asserted that “Jews do not feel safe or secure in certain communities in Europe.”

“According to that survey, almost half of the Jewish population is afraid of being verbally or physically attacked in a public place because they are Jewish and 25% of Jews will not wear anything that identifies them as Jewish or go near a Jewish institution for fear of an attack,” he said.

“European governments must be pressed to address this issue with utmost urgency.”

A third of Jews polled in the FRA study refrained from wearing religious garb or Jewish symbols out of fear, and 23 percent avoided attending Jewish events or going to Jewish venues.

While 66% reported anti-Semitism as having a negative affect on their lives, 77% did not bother reporting abuse or harassment. Almost a third were mulling emigration as a response to heightened anti-Jewish sentiment.

The countries facing the worst anti-Semitism are Hungary, France, Belgium and Sweden, the ministry asserted, quoting the FRA study.

The FRA came under fire from Jewish organizations as well as the state of Israel for dropping a working definition of anti-Semitism from its website last year.

Kantor said that he believes that it is easy to ignore hate and incitement when there are no “direct victims” but that such manifestations of anti-Semitism can easily be converted into action.

“We received a stark lesson two weeks ago in Kansas City that there are many dangerous anti-Semites out there who just need the trigger and the opportunity to transfer their hate speech into violent action,” Kantor said, referring to a recent shooting at a Jewish Community Center in the United States.

Three people, none of them Jews, were killed in that attack, which was perpetrated by a former Klansman and white supremacist.

Kantor is not the only prominent Jewish figure to project a pessimistic future for European Jewry.

Speaking to The Jerusalem Post after the far right Jobbik party won a fifth of parliamentary seats in Hungarian elections earlier this month, the Hebrew University’s Robert Wistrich, considered one of the foremost experts on anti-Semitism worldwide, cautioned that Jewish life in much of Europe will eventually become untenable.

“The Jews in Europe do not have a future…I think that their future is bleak,” he prognosticated.

Extrapolating from the success of far right parties such as Jobbik, Svoboda in Ukraine, the National Front in France, and Golden Dawn in Greece, Wistrich said he believes that the the nationalist Right would make significant gains in upcoming elections for the European Parliament.

Anti-Defamation League national chairman Abe Foxman has also expressed worries over the rise of the European far right, cautioning that it will achieve remarkable electoral successes when Europeans go to the polls in May.

“They’re going to try to maximize their political impact,” Foxman told the Post in January. “I think we need to be very aware and vigilant to what [kind] of a power base they establish pan-Europe.”

Foxman also critiqued the European Union over its response to the rise in anti-Semitism.

“There is no serious monitoring by continental entities,” Foxman averred.

The World Jewish Congress has also weighed in on the issue of anti-Semitism, with the international body calling for a Europe wide ban on neo-Nazi political parties during its plenary assembly in Budapest last May.

According to the anti-Semitism Worldwide 2013 survey distributed by the Kantor Center in conjunction with the University’s Moshe Kantor Database for the Study of Contemporary anti-Semitism and Racism and the EJC, anti-Semitism has begun to “infiltrate into the mainstream from the extreme left and right fringes.”

The perceived source of anti-Semitism differs on a country by country basis, the report noted.

Eighty percent of Hungarian Jews look at the far Right as the “main source of threat,” while sixty percent of Italians “pointed to the Left.” Almost three quarters of French Jews and sixty percent in Belgium cited their respective countries’ large Muslim immigrant communities. Traditional Christian religious anti-Semitism was the least cited of all the various forms of anti-Jewish sentiment.

Anti-Semitic violence declined in 2013 but overall anti-Semitism is on the rise, according to the Kantor Center.

This analysis, the report stated, is based on the “growing intensity of and increase in visual and verbal expressions, insults, abusive language and behavior, threats and harassments, and not necessarily on an increase in the number of violent incidents, (although in some countries manifestations of violent anti-Semitism are on the rise, or have become more extreme).”

Moreover, the authors contend, it is likely that given the reluctance of many to report being assaulted, “the situation is worse than the situation reported by monitoring agencies and communities.”

Over the past year 554 “registered violent anti-Semitic acts” were recorded, including assaults with and without weapons as well as arson, vandalism and direct threats against against Jewish institutions and property.

While this marks a drop from the 686 incidents recorded the previous year, a nineteen percent drop, the lower level of attacks is still close to the annual average for the past decade, which is “quite high compared to the preceding decade[’s]” rate of between 150 and 200 annual incidents.

“In other words, the drop in 2013 was compared to an exceptional year in which incidents spiked,” the authors hedged. “It should also be noted that the number of direct attacks against persons are steadily increasing, mostly committed randomly with bare hands or a near-at-hand instrument.”

Among the issues facing European Jewry over the past year have been campaigns to ban circumcision, bans on ritual slaughter in several countries, the spread of the sieg heil like quenelle salute and the use of anti-Semitism as a political weapon in the conflict between Russian and Ukraine.