3 Dead In Shooting At Jewish Museum Of Belgium 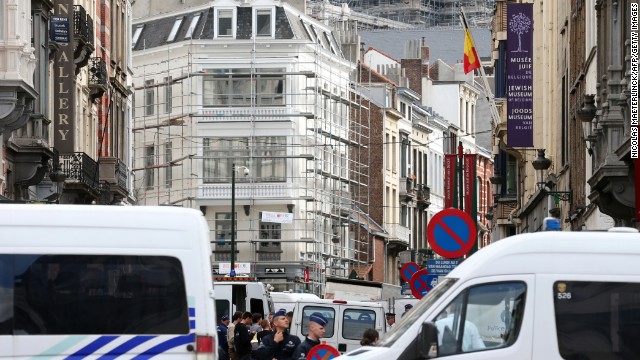 Three people were killed and another was seriously injured in a shooting Saturday at the Jewish Museum of Belgium in Brussels, Belgian officials said.

The circumstances of the shooting have raised suspicions that it may have been an anti-Semitic attack, but no motive has been determined.

The shooter remains at large, and the nation’s terror alert level was raised. Belgian public broadcaster RTBF quoted Brussels Mayor Yvan Mayeur as saying those killed were two men and a woman, while a man was seriously injured at the museum, which is near the tourist sites.

At a press conference, Milquet said the threat level is highest at locations frequented by the Jewish community. This measure was precautionary, she added.

Belgian Deputy Prime Minister and Foreign Affairs Minister Didier Reynders, who was nearby when the shooting occurred, told CNN affiliate RTL/TVI that he saw the victims inside the museum, then called the emergency services and put witnesses in touch with police.

“It seems that a car was double-parked and that a person went in and came out of the museum quickly after shots were fired,” Reynders said.

One witness managed to see the license plate of the vehicle used in the attack, according to Reynders.

“You can’t help thinking, when you see a Jewish museum, to think about an anti-Semitic act, but the investigation will tell more,” he said.

The person involved in the attack was carrying bags, and police were asked to look inside the museum to ensure that no devices were left behind, Reynders added.

Milquet told RTBF that the circumstances of the “haphazard” shooting “could give rise to presumptions of an anti-Semitic act.”

But she added that the matter was still under investigation.

‘We didn’t expect such a terrible act’

“While we don’t not yet have full information regarding the background to this attack, we are acutely aware of the permanent threat to Jewish targets in Belgium and across the whole of Europe,” he said.

“This is once again, much like the savage murders in Toulouse, a clear example of where hate and anti-Semitism leads. European governments must send out a clear message of zero tolerance towards any manifestation of anti-Semitism.”

Henry Goodman, president of the Jewish Community Center in Brussels, also drew a parallel with the attacks by a gunman in Toulouse, France, two years ago in which a rabbi, three Jewish children and three French paratroopers were killed, saying it “must be the same logic.”

He added, “They, whoever they are, are not going to close the community activities. Jewish people know what anti-Semitism means.

“They are not going to silence us. … We are going to survive and fight.”

Goodman told CNN he was “horrified” by what had happened Saturday.

“We didn’t expect such a terrible act. Since we don’t know who has done it or the reason, we can only imagine that it is an act of pure anti-Semitism,” he said.

A crisis center has been opened by the Consistoire Central and the Coordinating Committee of Belgian Jewish Organisations, and community leaders are in direct and permanent contact with police, local authorities and emergency services.

A global survey released in May by the Anti-Defamation League reported on the levels of anti-Semitism found in 102 nations.

Belgium received a 27% index score in the survey. The index score represents the percentage of adults in a country who answered “probably true” to a majority of the anti-Semitic stereotypes tested. Belgium has an adult population of about 8.7 million.

The ADL said one in four adults worldwide are “deeply infected with anti-Semitic attitudes,” according to a CNN.com report on the survey.