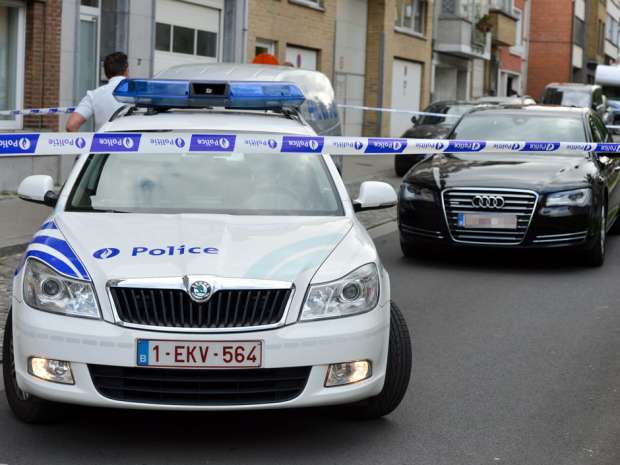 Three people were killed and one seriously injured in a spree of gunfire at the Jewish Museum in Brussels on Saturday, officials said. Police detained one suspect who was at the scene and are looking for a second.

The attack, which came on the eve of national and European Parliament elections, led officials to immediately raise anti-terror measures.

Belgian Foreign Minister Didier Reynders, who was in the vicinity, said the scene “was terrible and left me shocked” as he saw two of the three dead lying at the entrance of the museum, located in the swanky Sablon neighbourhood.

Reynders added that “you cannot help to think that when we see a Jewish museum, you think of an anti-Semitic act. But the investigation will have to show the causes.”

Interior Minister Joelle Milquet told reporters that the shooter apparently parked a car outside before entering the Jewish Museum. She added the gunman “apparently fired rather quickly, went outside and left.”

The car of one suspect stands behind barrier tape in Brussels, Belgium, 24 May 2014. A man has been arrested in connection with the deadly shooting at the Jewish Museum of Belgium, says the public prosecutor.

The three dead were two women and a man, and they were hit by bullets in the throat and face, said Ine Van Wymersch, spokeswoman for the prosecutor’s office. No further details were given.

Van Wymersch said one suspect was detained after he drove away from the museum around the time of the attack. A second person suspected of being implicated apparently walked away from the scene.

Milquet said anti-terror measures were immediately heightened. “We decided to apply to a maximum level of protection to Jewish sites,” she said.

“All Belgians are united,” he said.

European Jewish Congress President Moshe Kantor said that, even though it has yet to be established whether the attack was anti-Semitic, “we are acutely aware of the permanent threat to Jewish targets in Belgium and across the whole of Europe.”

“European government must send out a clear message of zero tolerance toward any manifestation of anti-Semitism,” Kantor said in a statement.

Police forensic experts search for evidence on the scene of a shooting near the Jewish Museum in Brussels on May 24, 2014.

The mid-afternoon attack occurred in the fashionable Sablon area, which was hosting a three-day jazz festival and is usually clogged with tourists and shoppers on weekends. It consists of some cobblestoned streets with numerous antique shops, trendy cafes and museums, including the Jewish Museum.

Police cordoned off several streets around the museum with blue-and-white police tape, and numerous ambulances and police vans were at the scene.

Viviane Teitelbaum, a member of the Brussels legislature, said anti-Semitic attacks reached a peak in the early 1980s but had dropped off before a recent rise in anti-Jewish sentiment.

“It has been a very difficult place to live” for Jews, she said, adding that many young people are leaving the country. She added some 40,000 Jews live in Belgium, half of whom reside in Brussels.

In France, President Francois Hollande condemned the “horrifying killings with the greatest force.” In a statement, he expressed France’s solidarity with neighbouring Belgium and condolences to the families of victims.