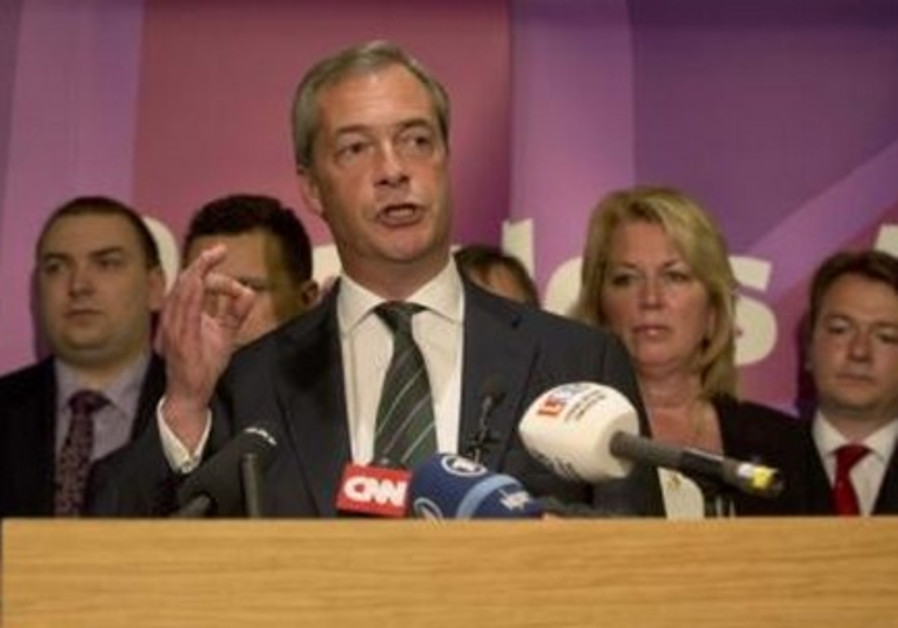 Gains by the far-right in the European Union Parliament have Jewish communities on the continent nervous as they ponder a future in which parties they see as anti-Semitic secure increasing influence over policy.

Despite the moderate left and right maintaining their majority, the American Jewish Committee noted, “several parties that promote hatred had strong support.”

The AJC bemoaned the fact that Jobbik is now the second largest Hungarian party in the continental legislature, while Greece’s Golden Dawn, a party which utilizes Nazi imagery and whose leaders are open in their admiration of Adolf Hitler, is now in the parliament for the first time and that Austria’s hard right FPO party came in third with just over a fifth of the vote, obtaining four seats.

Daniel Schwammenthal, Director of the AJC Transatlantic Institute said that while the “extent to which these parties will be able to unite to influence European policy remains to be seen,” their presence in the legislature will still “at a minimum, provide a soapbox from which to propagate their vile hatred.”

“These radical parties have been able to grow in their respective home countries for quite some time and are now cementing their presence also at the European level,” he warned. “They must be confronted head-on or the danger will only continue to grow.”

Schwammenthal was not alone in demanding that Europeans take a tougher stand against extreme parties.

“The alarming successes of extremist parties in these elections is the result of the passivity of European leaders and governments to deal with real issues facing European citizens,” European Jewish Congress President Dr. Moshe Kantor said.

“What better example is there of the lack of security, the absence of tolerance and the climate of fear in our European cities than this attack on Jews” in Brussels, the “capital of Europe,” he asked rhetorically, adding that “the European Union is supposed to be the bulwark against the rise of racism and intolerance, but it has become the catalyst for the justification of its citizens to vote for extremists and racists.”

“The European elections results have just revealed that our concerns regarding the rise of anti-democratic forces were indeed all too legitimate. The extreme right-wings parties can indeed celebrate a tremendous victory all over Europe,” said Dr. Dieter Graumann of the Zentralrat Der Juden, a Jewish communal body in Germany.

“It is the democratic parties that have now to ensure that the elected body of the European Union will not be misused and that the European values of tolerance and liberality will be preserved,” he said. “It is a terrible shame that the European taxpayer has to finance these racist politicians.”

Graumann called on the new parliament to make its first act the issuing of a “strong condemnation of any kind of hatred against minorities.”

World Jewish Congress President Ronald Lauder, who last year called on European leaders to issue a blanket ban on “Neo-Nazi parties,” called the far right surge a cause for great worry, on Monday.

“The future of European Jewry is at stake if these forces are not reined in. Extremists must not be allowed to set the agenda in Europe,” he said.

According to Roger Cukierman, the head of CRIF, a French Jewish umbrella body, the election results are especially worrying in light of the anti-Semitic attacks in Brussels and Créteil (southeast of Paris) where two Jewish men were attacked on Saturday.

“We are very worried,” he said. “While the strong result of the FN can be explained with the economic crisis in France, which must be overcome, it is also of critical importance that the mainstream republican parties reestablish trust with French citizens.”

Rabbi Pinchas Goldshmidt, the head of the Conference of European Rabbis, went even further, asserting that “The fact that Marine Le Pin will become one day the president of the French Republic looks more and more real.”

The elections as well as this weeks terror attacks, he said, “are an ominous sign of a worsening climate for Jews in Europe.”

Benjamin Albalas, the head of the Central Board of Greek Jewish Communities, also warned of the results, envisaging the specter of the pre-Holocaust surge in European anti-Semitism.

“It is not only very disappointing that Golden Dawn saw a significant rise in its share of the vote, winning three seats in the European Parliament, but also that other extreme-right parties in Greece and beyond did so well in the elections. A great number of European citizens seem to have forgotten what happened during the Holocaust and World War II. Racism and anti-Semitism are again hitting Europe,” he stated. “It is time for immediate action.”

The Simon Wiesenthal Center’s Efraim Zuroff was even harsher, stating that the elections could be “the beginning of a new and very dangerous era in which openly fascist and anti-Semitic parties might attain entrée into government coalitions, which would significantly change the current constellation of political power in such a way that could seriously jeopardize the future of European Jewish communities.”

In the same vein, Israeli MK Dov Lipman said that “while not trying to sound like an alarmist, I believe we must remove any obstacles preventing those from making aliyah from coming.”

“I meet regularly with members of European parliaments and they have warned of this turn amidst the European public,” he said. “Unfortunately, I am not surprised.”

Some Jewish leaders see a silver living in the election results, however, postulating that the rise of the far right may catalyze European Jews and Muslims to work together.

After the vote, the Gathering of European Muslim and Jewish Leaders, an interfaith group affiliated with the American Foundation for Ethnic Understanding, vowed to “work closely together to fight Islamophobia, anti-Semitism and xenophobia and prevent the far right parties from realizing their goal of passing a common legislative agenda in the European Parliament severely restricting the rights of religious minorities.”

“Just as European Muslim and Jewish leaders joined forces in recent months in successfully combating an effort by the Parliamentary Assembly of the Council of Europe to outlaw circumcision and to protest Denmark’s new law banning kosher and halal slaughtering, we will now stand together and speak with one voice against efforts by the extremist parties to implement their hateful agenda,” FFEU founder Rabbi Marc Schneier said.

Imam Ahmed Miktar, president of the Association of the Imams of France and a member of the GEMJL, agreed, stating that to succeed in protecting the rights of religious minorities, “we must learn to work together effectively on the both grass roots and leadership levels. Muslims and Jews Our communities can no longer afford the luxury of standing apart