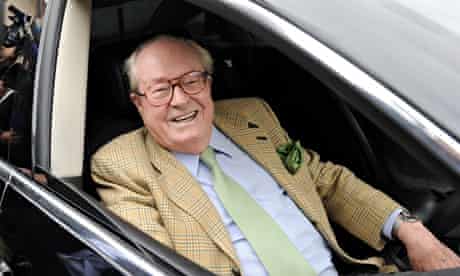 When France’s Front National emerged victorious in the recent European elections, party president Marine Le Pen appeared to have succeeded in her quest to persuade the voting public it was no longer extreme, antisemitic, or a haven for Nazi apologists.

Madame Le Pen, however, was not counting on her father, Jean-Marie Le Pen, the FN founder and honorary president.

While she claims to have “de-demonised” the party – and threatens to sue anyone who calls it “extreme” right – Le Pen senior repeatedly confirms the old French epigram: “plus ça change, plus c’est la même chose” (the more it changes, the more it’s the same thing).

Jewish leaders have called on Le Pen, 85, was to be stripped of his parliamentary immunity as an MEP after acontroversial play on words linking “oven” with a celebrated Jewish singer in a video posted in the FN’s website.

Launching into an attack on celebrities who have criticised the far-right party, including Madonna and tennis player turned musician Yannick Noah, Le Pen was asked about the French singer Patrick Bruel.

“I saw Mr Aliot’s reaction; if there are people of my own camp who interpret it in that manner, it’s because they are imbeciles,” he said, adding: “I don’t have to answer to him.”

The row came just weeks after Le Pen said Africa’s population explosion and, by extension, France’s immigration “problem”, could be solved by “Monseigneur Ebola”, referring to the deadly virus.

European Jewish Congress President Dr Moshe Kantor called on the European Union to strip Jean-Marie Le Pen of his parliamentary immunity and for the French authorities to charge him with incitement to racial hatred.

“Le Pen has unmasked the true face of the far-right of Europe days after their electoral successes in the European Parliament,” Kantor said. “While some have tried to whitewash and mainstream these parties, Le Pen’s comments demonstrate that they still stand on foundations of hatred, antisemitism and xenophobia.

“The European Union should fight-back against these far-right and neo-Nazi parties by demonstrating zero tolerance for racial incitement and it can begin by stripping Le Pen of any immunity for prosecution he might hold as an MEP for these comments.

“The far-right and neo-Nazis in Europe are pushing the boundaries further and further and they are destroying our democracy and the future of a tolerant and peaceful Europe that took a long time to build.”

Le Pen, who beat the Socialist candidate and qualified for the second round run-off for the presidential election in France in 2002, has been convicted of racism or inciting racial hatred at least six times and made provocative statements judged Holocaust denial. In September 1987, he said: “I ask myself several questions. I am not saying the gas chambers didn’t exist. I haven’t seen them mystelf. I haven’t particularly studied the question. But I believe it’s just a detail in the history of the second world war”. He was fined 1.2 million francs (€183,200). In 1999 he was convicted in a German court of “minimising the Holocaust” and fined.

Nor is it the first time he has targeted Bruel, who he pointedly insists on calling Benguigui, Algerian-born Bruel’s Algerian birth name.

He also physically assaulted a Socialist MEP in 1997, leading to his suspension from the European Parliament and a one-year ban on public office, advocated the forced isolation of those with HIV, accused former centre-right president Jacques Chirac of being “on the payroll of Jewish organisations”, and made a pun over minister Michel Durafour’s name, calling him “Durafour-crématoir” (Durafour crematory oven). Before the World Cup four years ago he complained the French squad contained too many non-white players, and in 2007 referred to Nicolas Sarkozy, whose father is Hungarian, as “the foreigner”.

He sued Le Monde newspaper for defamation after it claimed he had practiced torture while serving in the French army during the war in Algeria, but lost the case in 2003.