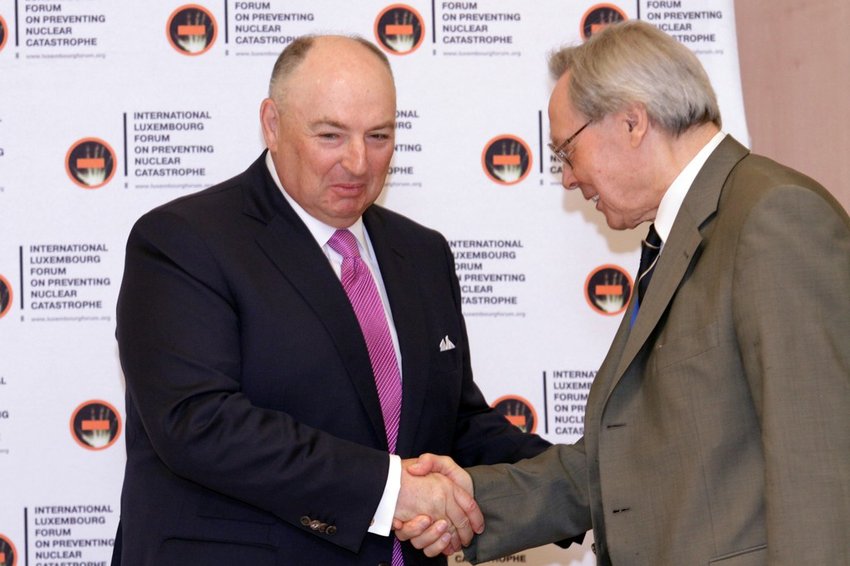 On June 10, 2014, the two day’s round table of the International Luxembourg Forum on Preventing Nuclear Catastrophe started in Geneva.

The Luxembourg Forum experts notice that recently the entire complex of the most important issues of nuclear non-proliferation became a secondary matter in the world policy due to several reasons, including the acute aggravation in relations between the leading Western states and Russia triggered by the situation in Ukraine. However, these problems have not disappeared, and inattention to them may further complicate their potential positive solution.

In this context the participants of the round table consider it necessary to join their efforts to overcome the stagnation in strengthening of nuclear non-proliferation and to boost the world leading countries’ cooperation in this domain regardless of the general political crisis and in spite of it.

“Even prior to the crisis related to Ukraine, the processes of further nuclear arms limitation and nuclear arms control ended up in a complete deadlock”, – the President of Luxembourg Forum Mr Viatcheslav Kantor pointed out in his opening address. “In spite of a consistent fulfillment of the terms and conditions of the new Treaty on Strategic Offensive Reductions between the U. S. and Russia, no consultations and negotiations on nuclear arms control required by the Non-Proliferation Treaty were held.

“The main reasons for this situation are related to the unforced obstacles to non-strategic nuclear weapon control, strategic precision-guided non-nuclear weapon control and missile defense control and to disagreements in respect of the ways to settle the regional crises. This entire situation puts the success of 2015 Review Conference of the Parties to the Treaty on the Non-Proliferation of Nuclear Weapons at the direct threat”, – emphasized Mr Kantor.

Based on the Conference outcome the experts will present to the leaders of the major countries, to the UN and other official international bodies their joint coordinated proposals on revival of the talks on nuclear arms control and further reduction, and on the steps to settle the regional nuclear issues. Participants express their hope that such proposals from reputable organizations cannot be ignored by the responsible leaders of the world’s major countries. Based on these proposals they may adjust their international security policy and promote the 2015 Review Conference of the Parties to the Treaty on the Non-Proliferation of Nuclear Weapons.

Leading Luxembourg Forum experts proposed to include into the Final Declaration the proposal addressed to the U.S. and Russia to complete the strategic arms reduction two years earlier, by 2016 instead of 2018, as was stipulated by a new Treaty. Adoption of this proposal by the U.S. and Russia could become an incentive to restore the negotiation process.

According to Mr Viatcheslav Kantor it is advisable to focus efforts of the Big Five nuclear powers on preparing their joint proposals to universalize the 1997 Additional Protocol prior to 2015 Review Conference. It is important to keep it in mind during the P5+1 negotiation on the Comprehensive Solution with Iran. “Taking into account the last updates on the P5+1 negotiations with Iran in respect of the Comprehensive Solution, we believe that it is absolutely important to formulate our view on its conditions and to support the claims to Iran in the context of this Solution”, – stated the President of Luxembourg Forum.

Forum’s experts believe that it is advisable to draw once again the attention of the U. S. Administration and the U. S. Congress to the necessity to finally ratify the Comprehensive Nuclear-Test-Ban Treaty prior to 2015 Review Conference, thereby increasing the chances of its success.

Moreover, the attendants proposed to include into the Final Declaration a proposal to prepare a treaty prohibiting the space launch of any type of weapons, and development and testing of the means of space objects’ destruction by land-based weapons, airborne weapons and sea-based weapons.

The attendants will summarize all proposals received during the Conference and present them during the second day of the event. Upon the ultimate approval of the Final Declaration a conference is planned to be held for this document to be signed by all leaders of organizations and movements attending the round table.

The Forum is one of the most representative non-governmental organizations uniting leading world experts on non-proliferation of nuclear weapons, arms reduction and limitation. The Forum is headed by its President, Viatcheslav Kantor, PhD. The principal guiding bodies of the Forum are the International Advisory Council and the Supervisory Council.

The Forum’s priorities are to analyze threats imposed by nuclear arms proliferation and elaborate practical proposals and recommendations on the ways to further reduce nuclear arms, strengthen nuclear and missile non-proliferation regime, counteract the attempts to acquire nuclear weapons and technologies by unstable regimes and terroristic organizations, and resolve the Iranian and North Korean nuclear crises.